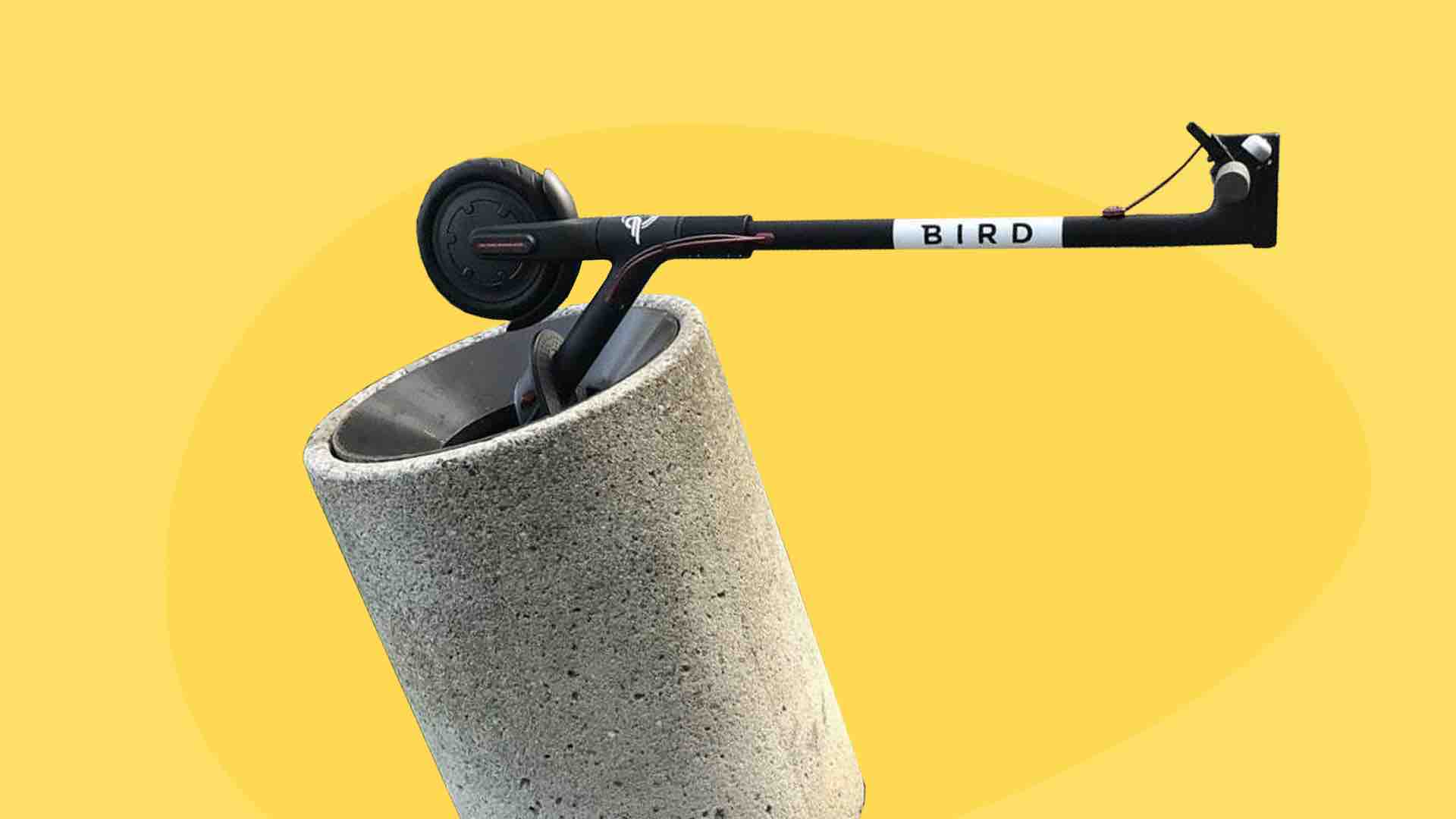 It wanted to change commuting: no easy task. And it would do so with electric scooters.

In a little over a year, it reached a billion-dollar valuation and flooded cities with its products. With a disruptive CEO, the right product, and a do first, ask later attitude, this company was well on its way to achieving its goal.

But 2020 rolled along. The global health crisis turned transportation upside down and revealed what was happening behind closed doors. It seemed out of a movie, but it was real life.

In this Forensics episode, we talk about a young, promising company with a dark side: Bird.

Meet Travis VanderZanden, Bird's founder and CEO. His mother was a bus driver in Atlanta and had to take him on routes because she was a single mom.

Instead of playing with other kids, Travis was more a witness of the good, and the bad, of public transportation.

From a very young age, he noticed that transportation got you from A to B. It just didn't do it efficiently. Such an experience, in his own words, prepared him for Bird.

But he didn't jump straight into transportation. After college, he worked for Qualcomm then for a company called Yammer, under founder David Sacks.

These two clicked, and though he left Yammer in 2013 to start his own company, Cherry, an on-demand car-wash service, Sacks would remember him.

Eventually, Lyft purchased Cherry in 2014, and VanderZanden entered Lyft as the COO. His tenure there was successful at first, but then tensions arose. In short, he wanted more power but didn't get it.

He quit the company. But guess where he ended up? That's right: Uber.

Lyft wasn't happy. He was, after all, their COO and could reveal secrets to Lyft's biggest competitor. But VanderZanden said he wouldn't, and you'd believe him, right?

Well, Lyft didn't. In fact, they sued him for violating confidentiality agreements. They would eventually settle out of court. But, remember this oops, I overlooked my mistake attitude.

Eventually, he left Uber because he wanted to spend more time with his family, and he hadn't planned to start another company. It just happened.

Nearing Christmas of 2016, he bought each of his two daughters a bicycle, but they preferred some old scooters they had.

Would adults react the same way? He purchased several scooters to try them out and ran into the Xiaomi M365.

He loved it. To him, this scooter was so elegant; it was as if Steve Jobs himself had designed it. He and his wife took the new scooters to San Diego's boardwalk where grown-ups, actual adults, were asking him to ride the scooter. Where did you get this? How can I get one?

VanderZanden had his Eureka moment.

Changing the world, one scooter at a time

To him, it was all too clear. Commuting was inefficient.

"Why are we using two tonnes of metal to move 70 kg bodies around while something that weighs 16 kilos like an e-scooter can do the job just as well? And why are we giving away so much space in the cities to cars?"

He grew obsessed with the idea and contacted his former boss, David Sacks, to convince him to join him in his vision for commuting: shared scooters.

Sacks was cautious. VanderZanden's two first startups had gone nowhere, and the idea seemed ludicrous: people could rent scooters and, once they had done using them, just leave them there. Wherever.

It sounded crazy. But others believed in the idea. Goldcrest Capital saw enough potential to fund the seed round with $3 million. So, now, he had the money. And though the start was positive, it wouldn't be a smooth ride.

Anyone over 18 with a valid driver's license could grab a scooter for $1 and pay 15 cents per minute of use. But, to get people to ride them, Bird was a little shady.

Bird started unloading scooters onto Santa Monica, and the sandal-wearing locals loved them. But, the company hadn't asked for permission. In fact, VanderZanden only wrote to the Mayor, introducing himself after the scooters arrived.

Bird, he promised, was the exciting, new mobility strategy for Santa Monica.

The Mayor wasn't so excited.

"If you're talking about those scooters out there already, there are some legal issues we have to discuss." Yikes. At least, he was polite.

His reaction, on the other hand, was anything but. The city filed a complaint, with nine criminal counts against the company. But why?

Scooters are in a regulatory gray area. Some cities allow them, some don't. There are those states that require helmets, while others don't. And, add to this, drivers weren't using the scooters adequately. They left them wherever they pleased: sidewalks, parking spots, parks, etc.

But, to VanderZanden, they were doing no harm. All he said was: "we're making commuting fun, and we're having a positive impact."

But, Bird did respond to the legal actions. It paid $300 000 in fines, secured permits, lowered the top speed from 22 km/h to 15 km/h, and began offering free helmets.

They also promised to pick up the randomly scattered scooters after 8 pm and replace them in the morning.

The company gained momentum and wanted to replicate this phenomenon all over the US.

But they weren't done with Santa Monica. In early 2018, Bird flooded the city with 1000 scooters and claimed that 50 000 people were using them.

Does this strategy seem familiar? That's right: it's basically how Uber and Lyft operate. First, get in, then negotiate. I wonder where he got that from.

Californians loved their scooters. Some even drove them up LAX or Downtown LA. And investors wanted in. In October of 2017, Craft Ventures invested $15 million, and, in March of 2018, Bird secured $100 million more.

By May of 2018, Bird had raised $150 million in a round led by Sequoia Capital. The company reached a $1 billion valuation: the fastest ever to reach Unicorn status.

But it didn't stop there. People wanted to be a part of the future of commuting, so much so that just four months later, Bird had reached a $2 bn valuation. With such growth, the company was looking to expand markets like Canada, Europe, New Zealand, and Latin America.

Things within the US weren't going as smoothly. Expanding to other cities was challenging because all states had particular laws and regulations regarding scooters. In fact, this part of the law is so complicated that, in some cases, Lime (Bird's biggest competitor) could operate while Bird couldn't.

But, chaos has been Bird's playground all along, for better or for worse.

They even bypassed San Francisco's regulation by buying Scoot, a company that already had all the permits to operate in the city.

But there were some serious issues. Take the scooters themselves. The Xiaomi M365 was made for consumer use, not for rentals, so it broke down within months. In fact, with these first models, Bird lost money on every trip.

They made up by raising a lot of money, and they came up with a new model, designed in-house, better suited for the rental business.

Their new scooter, the Bird Zero, opened another door: selling scooters. They then released another model, the Bird Two, and a bike/moped hybrid called the Cruiser.

But still, the lifespan was about a year, and, with such a short run, many scooters ended up as litter. Just check out this Instagram site, appropriately named Bird Graveyard.

Then came the accidents, and even deaths. But VanderZanden downplayed this, saying that accidents happen all the time and that scooters themselves didn't kill anybody.

Bird offered a monthly rental program in cities like Miami, Barcelona, and San Francisco to reach more customers. This appealed to some users, but some reviewers found the monthly plan to be uncomfortable. The available scooter was the cheapest model, the Xiaomi, and it was slow, with limited battery capacity, about 10 miles, instead of 15.

On the legal front, it was still a mix of positives. Cities like Milwaukee eventually allowed Bird scooters to operate. New York allowed scooters, but no rentals, and European cities like Paris were becoming hubs. In fact, Bird had promised 1000 jobs in the French capital.

They had even secured more money by the beginning of 2020. But nothing could prepare Bird for what was to come.

The health crisis that struck the world hit transportation particularly hard, and it hit fast. Empty streets were now filled with the carcasses of Bird's promise to change the world. The idea of shared transportation vanished from people's minds.

In an investigation, the New York Times revealed that scooter rentals were down close to 100%.

The scooter and bike industry saw 1000 jobs gone in a flash. Bird's biggest competitor, Lime, initially pulled out of 99% of its markets in March, only to slowly return to some cities. Income was depleted.

An industry that had struggled to navigate through laws and regulations was now fighting to survive. And Bird was no exception.

Suddenly, VanderZanden canceled all biweekly meetings (called birdfams) and turned secretive. He didn't make any efforts to communicate with his employees, most of whom worked from home.

Then, out of the blue, some employees got an invite for a Zoom Call. All it said was: Covid-19 Update.

When they logged in, all they could see was a gray background. It was a one-way call. A woman began reading a script, but her voice choked. Her speech lasted all but two minutes, and by the end, 406 Bird employees had lost their jobs.

The instant the call ended, they had their accounts deactivated: no more email, Slack, or computers.

Worse, some employees weren't able to log in and found out through text messages.

Management had asked one engineer to create a command that would instantly block all accounts once the call was over, and his name was also on the list. Employees compared it to Black Mirror, but it wasn't fiction.

"It should go down as a poster child of how not to lay people off, especially at a time like this."

Then, as the dust settled, many employees spoke out. According to The Verge, employees called their bosses creepy doofuses and a bunch of frat boys who all looked and sounded alike and made a lot of money.

Meanwhile, VanderZanden disappeared. He apparently delegated the firing process to Rebecca Hahn, the CCO. She was the voice reading the script.

When he resurfaced, he didn't mention anything in his Twitter account, replicating his "do, then talk (with no apologies this time)" attitude. He's now focused on selling scooters more than the sharing program. Bird has even come up with new models.

Bird seems to have survived this crisis, for now. But the question still lingers: are a bunch of disposable scooters the future of commuting?