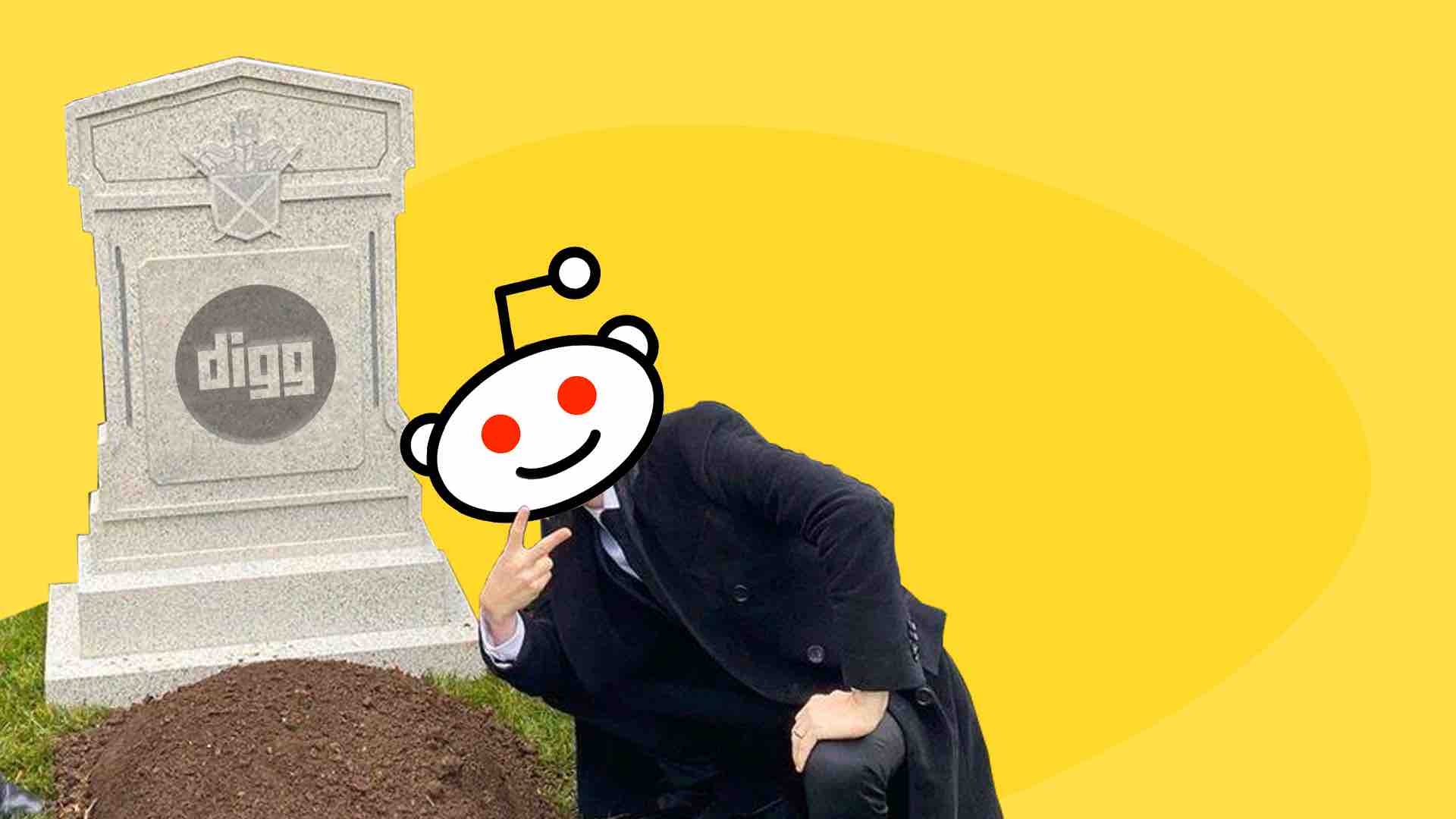 The so-called Web 2.0 - It could be seen as some revindication of the Internet after the wild financial speculation blew up the stock market in the late nineties, in what is known as the dot com bubble.

In the aftermath, there was a sense of caution and an undeniable optimism for the web's true potential, beyond the savage greed of some investors. And fortunes were made but this time based on real value.

Web 2.0 may sound like some technical upgrade to the web, but it wasn't. The concept was more about a new approach to creating websites and apps and how people interacted and expressed themselves on the web.

Social media is probably the primary outcome of that new interactive web, and companies like Facebook or Twitter started building their empires at that early age. But others did their thing too, like the social news website digg.com. It also rode the wave and had a taste of greatness. Just not for too long.

Digg was a massive website for sharing news back in 2005. In that boom of the interactive web, it became famous for allowing users to vote for their favorite stories. The most voted would hit the front page, making it a democratically curated news outlet.

If upvoting and downvoting content on the web sounds familiar, it's because Digg was a predecessor of one of today's most popular websites: Reddit. So, why does no one knows anything about Digg nowadays, and how did Reddit take over?

Digg was an internet darling in the mid and late 2000s. In those years, it grew wildly and amassed tens of millions of monthly users who loved it.

Kevin Rose was the young founder, and he soon made it to the front page of Business Week magazine, which seemed like a big deal back in 2006. He went on rocking a snapback, a goofy smile, two strong thumbs-up, and for some reason, a pair of headphones as if he couldn't get off his laptop or something.

And over the picture, the now-infamous heading: "How this kid made $60 million in 18 months". It was a pretty portrait of that pulsing optimism for web 2.0.

Digg had already raised tens of millions of dollars, and Business Week reportedly stated on that story that the company could easily worth around $200 million. It seemed like the ghosts of the dot com bubble had already faded away.

Digg was a news and content-sharing site where users could put together their collections and not rely on the media editors' choices. Other users could vote for the content they liked the most, and the most voted posts would make it to the front page, getting the most attention and traffic.

Like you can now upvote or downvote posts on Reddit, on Digg, you could "digg" or bury them. It was an exciting novelty for consumers because they had a say in what content could be relevant and popular for the first time.

And it was also fantastic for content creators and publishers, as it drove significant traffic to their websites. So, everyone loved Digg.

The Digg button that websites craved for back then allowed users to "digg" content from their site and let the rest of the community discover it. It was the precursor of the share buttons you see now all over the web, with links to all kinds of social platforms.

Sites like TechRadar had anecdotes of how a successful post on Digg would crash their servers with the traffic load in the beginning. Yeah, during the good times.

But the same site also reported back then how the traffic they got from Digg dramatically started to plummet and saw a devastating 97% year over year downfall from 2010. Ultimately, Digg went from having tens of millions of monthly users, to have a handful of millions in just months.

Yes, the Internet can be a fickle beast, as Kevin Rose himself has acknowledged. But Digg's downfall wasn't just caused by the Internet's swinging moods.

The story tells that it all started with an ambitious redesign of the site, which ultimately ended up backfiring, and attempted against its very own essence, and disappointed its community to the core.

A killer redesign… in a bad way

In late 2010, while still thriving and going through the growing pains, Digg underwent a complete redesign, not just aesthetic but also on its infrastructure and technology. It was V4 of the site, and it all fell apart.

In those days, the company's CEO reportedly said that they had "a new backend, a new infrastructure layer, a new services layer, new machines—everything."

And that's all good, but it seems like the timing and the implementation just weren't right.

They decided to fully migrate their backend to Cassandra's newly released technology, an open-source database management system. It promised faster loading times and better performance, but it wasn't all sunshine and rainbows.

The founder, Kevin Rose, had to admit that Cassandra was still in pretty early stages when they made the decision and ended up struggling with bugs and issues from their site and Cassandra's very architecture.

He said back then that they expected some bumps while rebuilding the site, but the whole thing ended up overwhelming them, and the website fell over as they rolled out the new version.

But on top of technical problems, they also made some product decisions that pissed off their loyal users, removing some features and adding others that turned the site into what it had shown not to be.

One of the main criticisms was that they started featuring content from big news and media outlets, going against its independent and free character. People felt that Digg had sold its essence by taking money from these sources, despite them admitting that they didn't take any money from this feature.

But the damage was done. User feedback was unforgiving; the people demanded to have their favorite features back and hated the new features. But developers in the company couldn't think of any features. They were all hands on deck, just trying to keep the site functional.

So, things weren't looking any good for Digg entering the second decade of the millennium. On the other hand, sites like Twitter and Facebook were nothing but thriving, letting people do the same they did on Digg and more.

Kevin Rose has said that "Twitter became a major place to find out what was breaking on the Internet (...) Facebook became a place to share links. Social media really grew up."

Sure thing, social media grew up, and it left Digg behind. As they worked to keep the site running and figure out what to do with the product, users had already been migrating to other similar platforms that were prospering themselves, like Reddit.

And it wasn't even like Reddit was competing fearlessly or anything. They seemed even to have a kind of friendly relationship.

One of Reddit's co-founders, Alexis Ohanian, wrote an open letter to Kevin Rose in 2010. He expressed that the decisions behind the horrible V4 of Digg were pushed by VC investors and not by Rose and his team. He said:

"It's a damned shame to see Digg just re-implementing features from other websites. But I've got a strong feeling it's not you making these decisions anymore, and to see your baby abused like this must be awful."

Indeed, it must be awful. As a CEO, having gone through a couple of full design and technology changes in Slidebean, I can only imagine the horror of seeing your product crumbling before your eyes like that.

‍
Talking about that, go ahead and check out Slidebean.com, you can sign up for free and get access to some pre-built presentation templates and a slick editor. The AI engine that will help you easily organize your slides was one of those major technology changes we went through a couple of years ago - thank god it didn’t go like Digg.

But now, Slidebean is much more than presentations. If you’re starting up a business or thinking about pitching an idea, you can find great pitch decks and other useful templates to hit the ground running.

Back to Digg: by mid-2012, six years after its inception, Digg was sold for $500K. That's about $195 million less than the valuations from a couple of years before.

Its strepitous fail became a cautionary tale for internet companies at the time, and it almost brought back some fresh reminiscences of the dot com bubble burst.

Hertz Car Rental: Why did they go bankrupt?