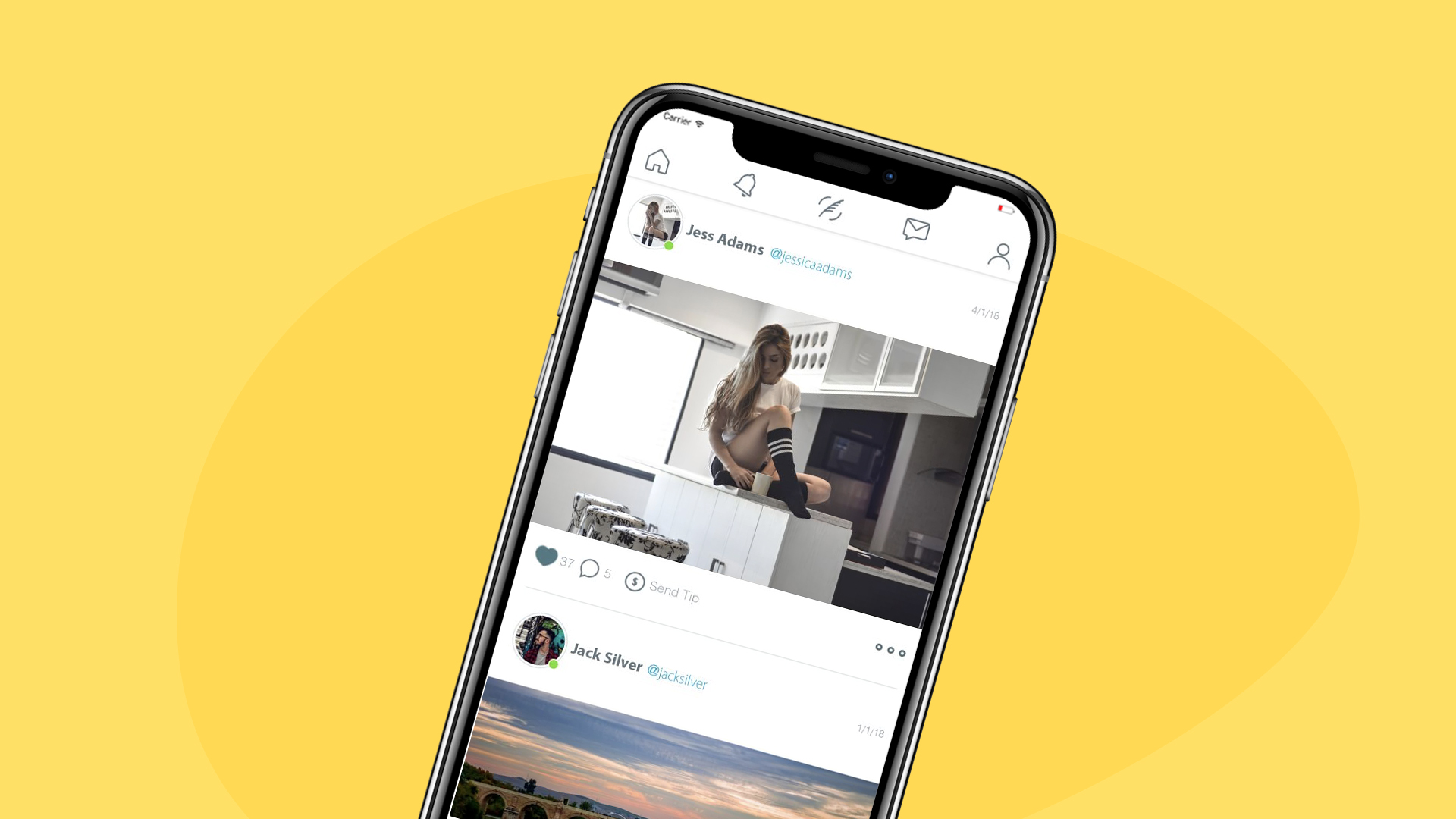 Only Fans explained: how much money can a nude make?

Only Fans explained: how much money can a nude make?

What do you get if you can have influencers and explicit pay-per-view content in the same place? Social media with paid nudes? Well, yes and no. A sponsorship site for adult-content creators? Yes and no.

What you get is OnlyFans, and people are still figuring out the morality around it.

This site is only four years old, and it grew wildly in 2020, now counting more than 90 million users and a million content creators. It is the latest disruption in the social media landscape, but also in the adult entertainment industry.

That's right, if you are younger than 18, you can't get in, so that leaves around 30% of TikTok users out. But still, celebrities are making millions, influencers and some regular folks are making a living out of it, and consumers are, well, spending money on it.

So, is everyone getting naked in OnlyFans? Let's find out and try to understand what's with the hype and the controversy. Welcome to Company Forensics.

To start with some background, that is how news outlets have referred to the founder of OnlyFans, the 37-year-old British businessman, Timothy Stokely. And it seems like a rightfully earned title.

Before founding OnlyFans, which he actually ran like a family business with his father, a former British banker, Stokely did things like Customs4U. That was a service where people paid to have their sexual fantasies fulfilled, sort of speak.

It was a direct-your-own-porn kind of thing where customers could buy personalized videos, photographs, or other tokens from their favorite models on the site. Just in case you wonder about the scope of those custom requests, we got you.

In a rare interview from 2014, published on the media site Vocative.com, Stokely himself offered an example to explain Customs4U:

"For example, I may select Jane, and I may select the category "lingerie." But my description might be something like, "Hi Jane, I'd like you to be wearing black lace lingerie and red lipstick and high heels, and I'd like you to say my name, Timothy, throughout the video."

So, there's that. Apparently, Stokely picked up on a trend of models and sex workers taking requests from followers through social media channels like Twitter. They were building up their follower base there to sell their content and services elsewhere.

That's because explicit content is not allowed on platforms like Twitter or Instagram. So Stokely thought of creating a hub for them to sell their videos and photos without using social media as an intermediate step and offer customers a guarantee.

By then, he was running a membership site that produced fetish content. They were getting so many requests that the idea of custom adult entertainment came up. And that seed eventually became OnlyFans.

How does onlyfans work

In case you still don't know, OnlyFans is a social-media-like service where users can sell original content to their followers, or fans, for a monthly fee.

And selling original content in OnlyFans is almost equal to selling nudes and sexual material. Alright, not everything is about that, and there may be an increasing number of people selling different content types now that it is so massive.

On the other hand, the subscribers get something like a social media feed, where they scroll through the posts from those they pay to follow. They can also send tips and interact privately with their content providers.

The subscriptions range from $5 up to $50 a month. The company keeps 20% and the creator 80% of the earnings, something like the Uber model, with a big difference: the provider sets the price in OnlyFans.

So, with the recurring revenue from subscriptions, plus the tips and the ability to also sell posts individually, it can get pretty lucrative. That's likely one of the reasons why it became so popular in 2020, a year where many lost their job and turned to less conventional occupations.

You may have heard stories from unemployed people now managing to make a decent living from selling their pictures and videos in OnlyFans. The top earners can make hundreds of thousands or even millions every month.

But don't get it wrong, it's not easy money. At least not for everyone, and there are definitely more stories of people who make very few or no money out of it. The competition is fierce now, and some newcomers to the platform hoard all the attention.

Bella Thorne, yet another former Disney child-star who grew into a kinky influencer, was one of the first mainstream celebrities to sign up for OnlyFans, and she changed the game. Apparently, she ruined it for many.

Thorne joined in August 2020 and made no less than $1M in about a day, and she doubled that within her first week. But she also didn't sell any nudes, despite reportedly having said that she would, and charging $200 for the pictures.

To start, they don't give refunds anymore. But most importantly, they applied some restrictions to their payroll model, like paying the providers every month instead of every week, as it used to. They also capped the price of subscriptions at $50 and tips at $100.

‍
That pissed off many and generated backlash against Thorne. Sex workers felt tricked, and some even made the argument that she had little to no need to open an OnlyFans to make more money.

But beyond the mediatic controversy and what she said about it, the fact is that she was probably the first to expose this relatively private social media to the rest of the world.

Others have followed suit, like the famous rapper Cardi B, who happened to be a sex worker herself before succeeding in the music industry. Tyga is another rapper known for having made millions of dollars through his social media, including OnlyFans.

There’s a YouTube trend of “I paid for Cardi B’s OnlyFans so you don’t have to” videos, and not just her. Although I guess they can’t show the full content, they show hints and share their reaction to the content that buyers can get.

These celebrities come to the platform with a noticeable edge over the rest of the commoners and are not doing any sex work. Their offer is allegedly more about exclusive access to personal stuff in their lives and work.

And ultimately, OnlyFans wants to get away from the adult entertainment umbrella and make it more accessible for all kinds of users, influencers, and creators.

The growth numbers may suggest that they've been achieving that, but the sex workers or exhibitionists who first turned to the site and helped it grow now claim to feel shamed and even denigrated by the mainstream judgment.

At this point, some of you may be wondering, who would pay to get pornographic material that is otherwise blatantly free on the web? That's where OnlyFans may set itself apart from classic adult entertainment and become something else.

The British model Danii Harwood has been one of OnlyFans's top-earners, and she has described some aspects of her work. She said in The New York Times:

By the way, don't think that only women do OnlyFans or earn money with it. Men also do, and the gay scene is also growing and pretty lucrative. What’s clear is that the majority of consumers on the platform are men.

Matthew Camp is another OnlyFans model, reportedly earning good money. He said this to the New York Times about Tumblr, another sex-loaded social media that pretty much died after banning pornographic material.

"Tumblr was filled with the most extreme sexual experiences you could see (...), and I think a lot of people were turned off by that (...) They want a boyfriend experience. They want to fantasize about someone that they want to have sex with and not feel disgusted by it.".

Instead, OnlyFans offers this in a social media shape, where creators of all kinds can develop a more intimate relationship with their fans. And in cases, they even become a sort of virtual escort.

Models may get to know some of their most regular fans more intimately and develop a closer digital relationship. As long as they keep paying their monthly fee, of course.

Facebook, Youtube, TikTok, or Twitter all have their own breed of influencers, who become famous on their platform. Are OnlyFans influencers sex workers? Are celebrities ruining OnlyFans for them by turning it into a mainstream social media? Tell us what you think