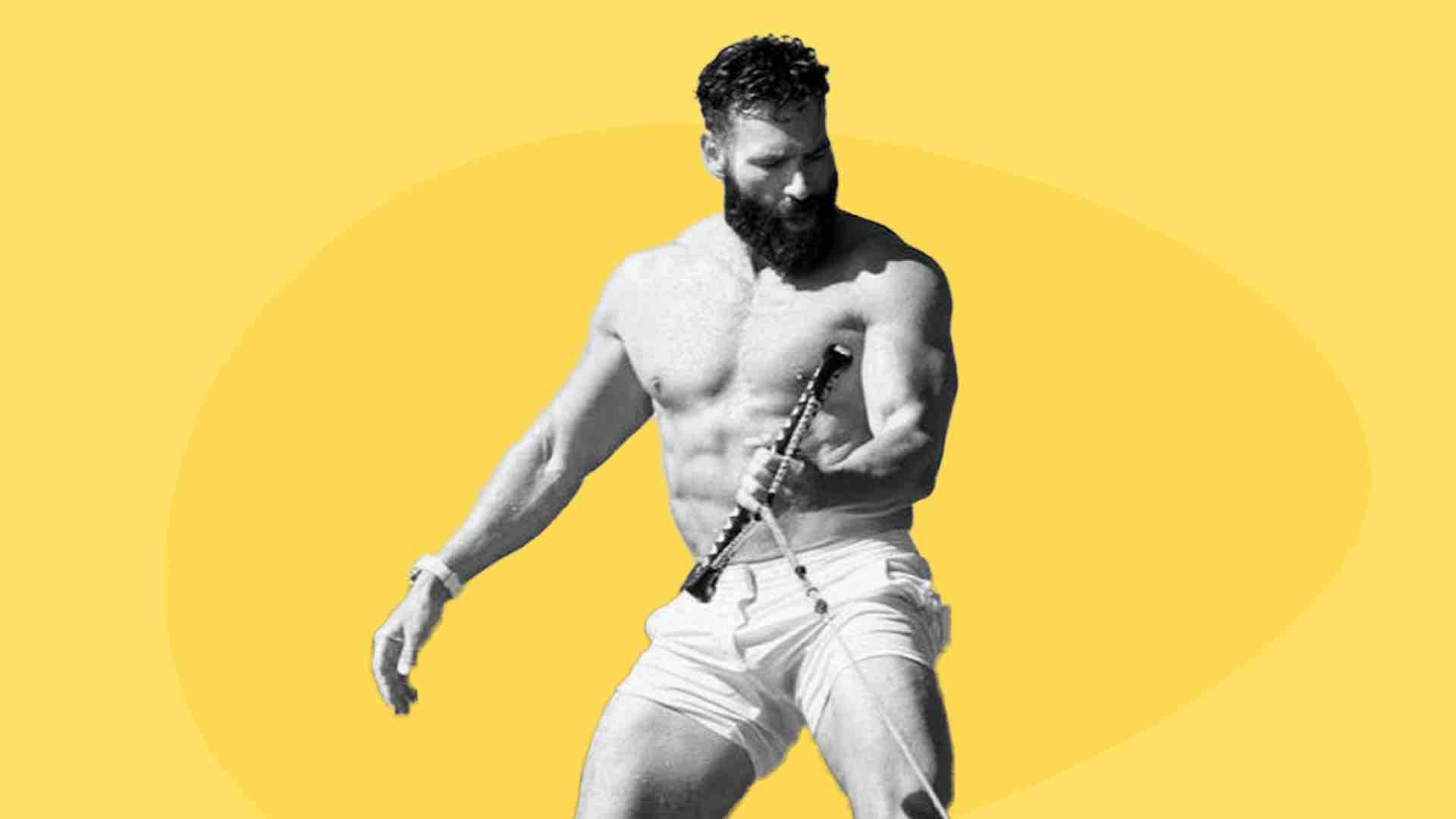 His Instagram is the stuff of legend and has even earned him the rank of King of Instagram. Millions of followers have seen him cruise around in yachts, sleep on stacks of money, and even fired M-60 machine guns.

He's also an actor and entrepreneur who made his riches playing poker. At least, that's what he has told the world.

But, lately, Dan Bilzerian's lifestyle has caught up with him, a lot of his past has come to light, and he doesn't seem to be that perfect alpha-male example. Let us tell you all about it in this Forensics.

Who is Dan Bilzerian: Early life

Born in 1980, Daniel Brandon Bilzerian is the son of Paul Bilzerian. We need to pause here and go back to the Bilzerian genealogy for just a minute because Paul was quite a character.

After serving in Vietnam and a stint in university, he made a big name for himself in the corporate world in the '80s by becoming a corporate raider.

Corporate raiders are people who buy large stakes in companies and, after gaining control, take action to increase the stock value. But these actions are usually either unethical or go against company management.

People knew him as aggressive and sometimes successful. But his practices were just too obvious, and the SEC was on to him in no time. By 1989, authorities accused him of fraud.

But Paul Bilzerian was elusive. He delayed trials and used defense allegations such as I didn't hurt anybody or Hey, I'm a Vietnam vet! His strategy paid off as authorities could not put him away for the full extent of his crimes. Instead, he'd end up paying but a fraction of his theoretical punishment.

He served 16 months in prison instead of four years and paid just $3.7 million of the $62 he had defrauded. And, trust me, there are two fundamental reasons why I'm telling you this.

But first, let's go back to Dan.

College, the Navy, and poker beginnings.

Dan Bilzerian wasn't a good student, anything but as he dropped out of four high schools in just three years. Given his failed academic endeavors, he enrolled in the navy. Apparently, he was weeks away from graduating from the highly demanding Navy Seals, but he "pissed off" an officer, leading to his expulsion. Apparently.

So, he gave the academy one more shot, and he enrolled in the University of Florida, where he apparently graduated from Business. Apparently.

But most importantly for our story, that's where he fell in love with poker, a love affair that eventually broke him.

Dan Bilzerian had long said that the funding for such a lavish lifestyle has come from poker, and poker alone. Repeatedly, he has stated that he's earned as much as $50 million playing poker, and the media believes him.

In 2013, when he had a mere 200 000 followers, the Daily Mail called him the $100-million poker champion. They also called him a playboy with a lunatic lifestyle, but who reads those articles, anyway?

And yes, the world of poker is quite lavish. But some people within the poker circles didn't buy Bilzerian's persona. Professional player Doug Polk went as far as analyzing Bilzerian's game and found many inconsistencies and mistakes professionals at that alleged level don't make.

Though some criticized him, many accepted the fact, pro or not, Bilzerian was a walking promotion machine. Followers increased exponentially, and poker was regaining popularity thanks to him. People wanted his lifestyle, even if it was extreme.

So extreme that some sources disagree on how many heart attacks he's had: the base number is two, before the age of 30. Some sources say he had a third one, but others say it was a pulmonary embolism.

At first, he said it was due to fatigue because he didn't sleep for three days. But then he revealed it was more a combination of Viagra, cocaine, and exhaustion. Light stuff.

But why does all of this matter?

The money came from somewhere

how did dan bilzerian get rich

In 2014, Dan Bilzerian finally told WSJ that he had inherited some money from his father. But, he didn't disclose how much.

And here's the first reason why I was telling you all those things about his father.

Paul Bilzerian never actually returned the money to the SEC because he declared bankruptcy in 1991. But what he did was funnel the money through a complicated network of partner companies and trust funds. Some companies belonged to his wife; he owned others, but proving so was problematic for the authorities, and one of the trust funds, which had a total of $11.86 million, belonged to his two sons.

Now, we're not saying Dan Bilzerian's money comes from his father's shady businesses, but we're not saying it doesn't. What we know is that since about age 30, he's been in the public eye, for better or for worse.

Bilzerian has never shied away from the spotlight. In fact, he has even ventured into acting. He invested $1 million in the film Lone Survivor in exchange for eight minutes and about thirty seconds of dialogue.

Wait, you can do that?

Anyway, the film company cut his screen time to about a minute and just one dialogue line. He wasn't happy, so he sued them. Eventually, the movie was so successful, he earned more from royalties than the lawsuit, so he dropped it.

But it hasn't only shortened screen times. It's gotten to be more serious.

Bilzerian was present at the Vegas Shooting and decided that it was okay to film himself then post the videos on Instagram. He described the chaos in the first videos, even narrating how people had died around him. Other videos surfaced in which he played hero and asked a cop for a gun to help out.

The video shows him flashing what seems to be his gun permit and asking for a gun. He asked officers: don't you want my help? To which one police officer politely replied, "who the fuck are you? Get away from me."

Many, including veterans, criticized him for wanting the spotlight and uploading the videos to Instagram, which he has since taken down.

The controversies add up. Once, Bilzerian threw a woman into a pool and broke her foot. She sued, and his lawyer said it was "an act of God." He kicked a model's face at a bar but claimed he was breaking up a fight. Then he was arrested for trying to build a bomb.

So, when he announced his new company, Ignite, the world took notice.

In 2017, Bilzerian created the Ignite Cannabis company to become, in its own words, the first premium global cannabis brand. After just months in existence, Ignite said it was a lifestyle brand. They still sold their cannabis products but also included clothing, beverages, and vapes.

Ignite went public in February 2019 and reported an accumulated $3.5 million in revenue from January to June. They had hired lifestyle veterans such as Linda Menzel and Gene Bernaudo. So, it was a promising start, right?

Not really. The company had $23 million in losses during that same period. And it doesn't end there, because there was a big question.

I cover weed and CBD for a living. I live in an area absolutely saturated with CBD products. And I do not think I have ever seen an Ignite product out in the wild.

So, while young companies can struggle to reach profitability, and some might even have difficulties placing their products, Ignite was different. The company wasn't just financing itself.

Ignite enjoyed a $52 million valuation at the beginning of 2020. CBD and THC products had seen an increase in consumption in the past months and the, as the global health crisis sharpened, companies in the market saw a boost in sales, but Ignite didn't.

Though rumors were floating in the air, the reason for the losses surfaced in mid-2020. Ignite was Bilzerian's cash cow. The company funneled $67 million to finance his lifestyle and pay for such expenses as the lease for his Los Angeles home, about $200 000 a month.

Other expenses included $15 000 for a ping-pong table, $26 000 in Instagram promotion, and a $130 000 Bahamas photoshoot. All Dan Bilzerian did was swipe the credit card, and Ignite took the blow.

After the report, anonymous employees confirmed Ignite was there basically to pay for Bilzerian's tastes. They remained undercover for an important reason.

When the company's former president, Curtis Heffernan, questioned the expenses and refused to pay for them, Dan Bilzerian fired him the next day. This, once again, went to court.

But the financial hardship went deeper. Ignite's money came from two sources: one was through issuing and selling stocks, and the other was through raising debt. According to Ignite's annual filing, $25 million came from shares, $20 million from convertible debt, and $24 million from what they refer to as a "short-term promissory note."

So, the company existed thanks to outside money and no real sales. Add to this that the internal finances made no sense.

Ignite's promotion budget was $22 million while revenue was less than half, and all the while, Bilzerian was not slowing down. His IG kept showing bikini-clad women, yachts, and stacks of money. When news broke out of Ignite's finances, he downplayed the situation, using Uber's financial position as a reference, which has famously operated at a loss since its beginning.

Despite his comments, Ignite was struggling. In less than a year, it had four presidents. Also, partners felt the risk was too high, and in October of 2020, CannMart, one of their main partners and their leading distributor in Canada, decided to terminate the partnership.

With heavy losses, no products, and no distributor, Ignite's stock plummeted from $1.44 Canadian to $0,36 in no time.

As of the making of this video, analysts have said Ignite has only weeks to live. One estimate is that by the end of the year, the company will go bankrupt.

So, it seems that the magic carpet ride is over. The funds for a modern-day Sodoma and Gomorrah have dried up. Perhaps, the SEC can rest in peace, knowing finally where all the money has gone. Which leads me to that other reason why history was important. The apple doesn't fall far from the tree.