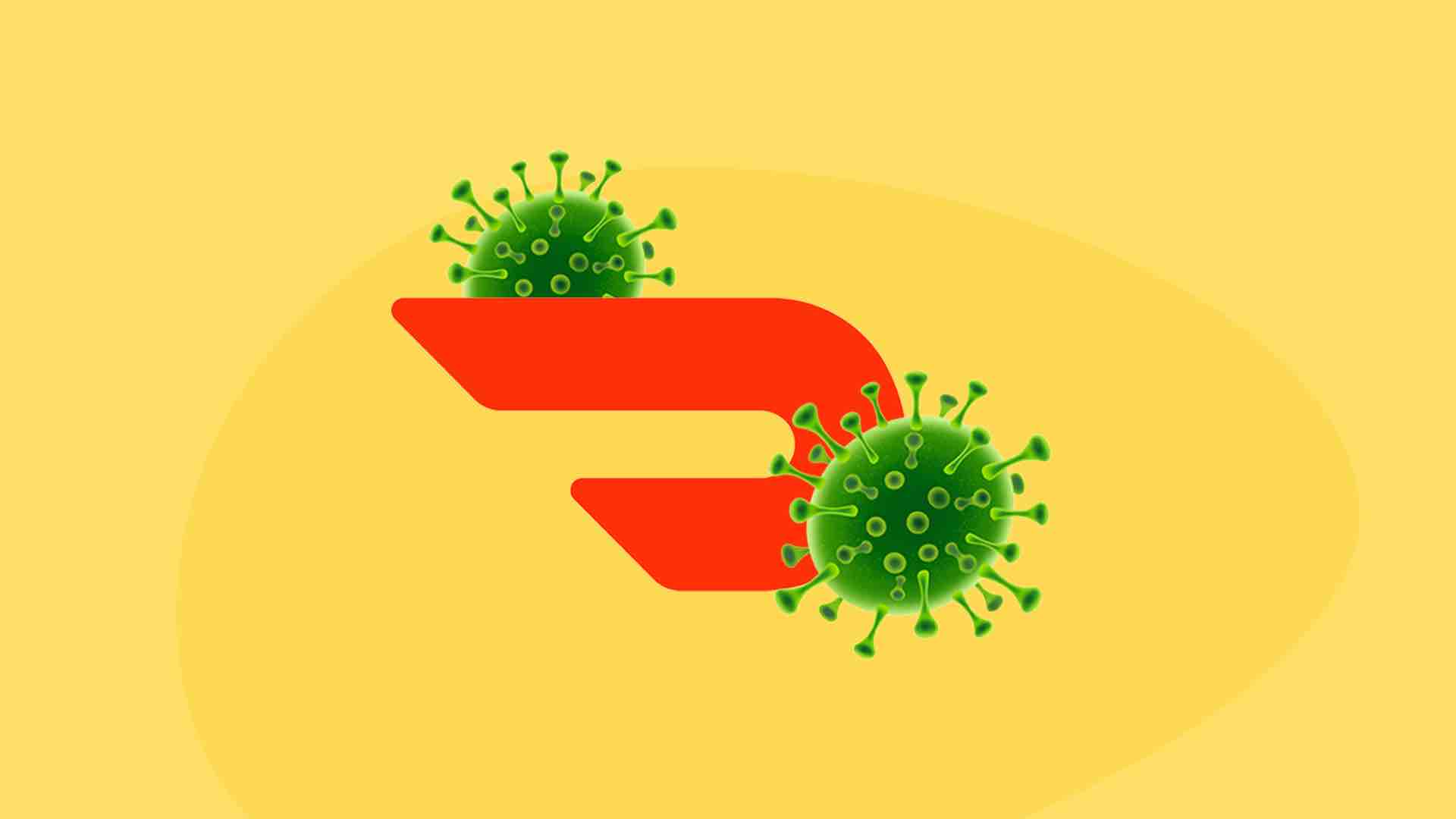 DoorDash: ready to deliver on its IPO

DoorDash: ready to deliver on its IPO

Nowadays, with just a couple of taps, your favorite food is at your door. Delivery apps, especially in this hectic 2020, are a staple in our day-to-day lives.

With thousands of restaurants to choose from, ease of use, and the comfort of staying at home, it's no wonder why these apps are such a success. But food delivery technology is also controversial.

Accusations of monopolistic behavior and stingy earnings for contractors have surfaced lately. Plus, there's always the question: will we have to stay indoors for much longer?

So, when delivery giant DoorDash quietly announced its IPO in late 2020, some were excited, but others were cautious. But, how did DoorDash get to this point? We'll tell you all about it in this episode of Company Forensics.

In 2012, founders and Stanford students Evan Moore, Andy Fang, Stanley Tang, and Tony Xu were developing technology for small business owners. To test their app, they had given it to several small businesses, including a bakery in Palo Alto, California.

And the app worked perfectly. Well, no, it didn't.

The app didn't even solve the bakery's needs, which, by the way, were pretty simple. All the bakery owner needed was to deliver all her orders.

Then and there, the founders had their Eureka moment: many restaurants aren't able to deliver. So, they would fix that, with a very, and I mean very, simple idea. One afternoon, they created a website, pasted .pdf menus from local restaurants and their personal phone numbers. They called it PaloAltoDelivery.com.

That's right. The founders would act as the restaurant's delivery service for a flat fee, regardless of the order size. They were sure it wasn't going to work until it did. Suddenly, the four partners had delivered the first 200 orders and needed to hire people.

Here's an interesting tidbit. Delivery is such a vital learning experience that new DoorDash employees must deliver at least once a month.

In early 2013, the YCombinator program dished out $120 000 as seed capital, and the company changed its name to the much more appealing DoorDash. Investment kept coming and, in September of that year, the company received $2.4 million.

DoorDash was gaining traction in months, but the idea of delivery apps wasn't new. So, what set them apart?

Industry experts credit the app's focus. While competitors like GrubHub and Seamless helped restaurants that already delivered increase their sales, DoorDash provided a logistic solution. It had its own delivery force so, if a restaurant couldn't or didn't want to go through the hassle of delivering, it could now outsource the service to DoorDash.

Makes perfect sense. And, with this equation, DoorDash went from an improvised idea to a serious contender.

After the initial investment, DoorDash expanded rapidly in very little time. In 2014, it allowed cyclists to deliver, which opened the door for more people to work as Dashers while also improving last-mile services.

In 2015, with about $60 million in investments, a $600 million valuation, and already operating in 18 cities, DoorDash carried its aggressive expansion, even eyeing Canada.

They also overhauled their brand, invested heavily in customer service, and updated their app while still maintaining the simple and easy-to-use interface. Improving while keeping its essence was one of the keys to DoorDash's success: thousands of options and easy to use.

DoorDash was firing on all cylinders, and it showed. After expanding to cities like Toronto in Canada, the company received $127 million in 2016 from big names like Khosla Ventures and Kleiner Perkins.

Let's talk about this significant investment. Rumors had spread that, with this funding round, DoorDash would finally break the $1 BN and become a Unicorn, one of the fastest to do so.

But it didn't happen. In fact, three months after rumors surfaced, DoorDash internally lowered the valuation to $700 million, which experts took as "signs of trouble" in the food technology and delivery industry. Could a company that downgraded its valuation by 30% keep up its performance?

It seemed that the company was failing to attract enough interest and support. But, the founders and investors quickly denied that the Unicorn valuation was ever a goal. Plus, they reminded the world that 2015 was not a kind year for investments, as many startups struggled to reach their funding goals.

And it wasn't like DoorDash disappeared. Anything but. In 2017, it made its first acquisition when it purchased Rickshaw, a courier and logistic startup that would significantly improve DoorDash's own platform, Drive, allowing customers to make deliveries.

So, now the company was expanding to other areas within the food market business. And, in 2018, DoorDash would make another big splash.

You might've heard of a company called Softbank. If you haven't, check out our video on them. This company is famous for its massive investments, and when they invested in DoorDash, it was no different.

In March 2018, Softbank dished out $535 million to propel DoorDash to new heights. Finally, DoorDash was a Unicorn, with a $1.4 BN valuation. But still, the founders were cautious and quite conservative with the news.

"There still remains to be skepticism in our space. On the flip side, I think it's also become obvious that a few winners are emerging."

Caution made sense. Before those $535 million, DoorDash had only raised $170 million while Postmates, one of its closest competitors at the time, had raised $278 million. Plus, DoorDash was still trying to find a way to be profitable. Their expansion continued, but at some point, they needed to turn in a buck, and this discussion will come up later.

For the moment, DoorDash didn't slow down. Later that year, it overtook Uber Eats as the number two food delivery app in the US and closed in one number GrubHub.

According to a study by Edison Tech, they were growing so fast that, by September of 2019, Doordash controlled 35% of the US market share.

And that same year, it had started operating a Ghost Kitchen in California, a place where restaurants could outsource their production and up their delivery game. DoorDash provided the tools and facilities; all the restaurants needed was the food and the staff. With much hype, people called it the WeWork of kitchens.

This model would even help in the worst days of the 2020 health crisis. In response to the massive loss in business restaurants suffered, DoorDash launched an initiative in late 2020 to provide restaurants with facilities so that they could start working again.

So, right now, there's nothing but praise. From DoorDash's tech-driven focus to tending to suburban markets, from helping restaurants to dominating the market, the world seemed to love DoorDash. Great! They deserve that IPO.

But, this isn't called Forensics for nothing.

Sure, the numbers are impressive. In late 2020, DoorDash had a grasp of 51% of the market. It had partnered with CVS, expanding into grocery deliveries, and consolidated partnerships with restaurants. In fact, big names like The Cheesecake factory and Chipotle have credited DoorDash with boosting their sales. That's huge.

But DoorDash isn't perfect. In 2018, hackers stole information from 4.9 million customers, merchants, and delivery workers. It took DoorDash five months to detect the breach, then the company didn't say much and kept what had happened a secret.

Then many restaurants began complaining that they appeared in the app when they didn't ask to. There's even a story of a pizza place that made a profit because DoorDash sold its pizza for less than the app paid the restaurant.

However, all these gremlins seem harmless compared to the tipping controversy. Basically, the company pocketed the tips. After investigating, NBC explained that, for example, if a Dasher is guaranteed $6 and the customer doesn't tip, then Doordash pays the full fee. Which sounds great.

If the customer tips $5, for example, then DoorDash lowered the Dasher's fee to, say, $3 and used part of that tip to reach the guaranteed $6, then keep the rest.

Not cool, and authorities took notice. Attorney General Karl Racine sued DoorDash for "pocketing tips meant for workers and misleading customers about where their money was going," according to CNBC.

DoorDash denied all the accusations but mysteriously changed its tipping policies right after news broke out. Right.

With the change, the company reassured everyone that Dashers' earnings will increase by the exact amount a customer tips on every order.

That's great! But, wasn't that the idea all along? And, even with this change, the lawsuit continued. In November 2020, DoorDash had to settle for $2.5 million for misleading users and Dashers.

And the controversies didn't end there. It's been accused of monopolizing the market, and then there are the financials. According to the NYT, DoorDash lost $450 million in 2019. They were burning through money!

Yes, it has a $12.7 BN valuation, and names like SoftBank are backing it up. But let's remember that Softbank's investments haven't done very well lately.

And let's not forget about the competition. DoorDash has the most significant grasp on the market, but it had nowhere close to that just two or three years ago. What happens if another company comes in that's more attractive and cheaper? Will customers be loyal to a food delivery app? It seems unlikely.

So, when DoorDash announced its IPO, the announcement came with a big question: is all of this for real?

In late November, the company revealed that it planned to raise about $2.8 BN and increase its valuation from the current $16 BN to about $30 BN.

But also, DoorDash revealed that it had seen significant revenue during the first nine months of 2020. According to its IPO filing, it has seen $1.92 BN in revenue and reported a profit of $23 million for the first time in its history in late 2020.

But the world is changing, especially with hopes of a better tomorrow. Just read this NASDAQ analysis on DoorDash.

The accelerating top-line growth and improving the bottom line at DoorDash makes this a great time to go public, but it's also hitting the market at an inopportune time. Stay-at-home stocks have fallen out of favor since encouraging vaccine news started breaking earlier this month.

Just as everything changed in 2020, it can change again in the future. Competition can get more challenging, conditions might get more complicated, or DoorDash might continue its remarkable growth.

So, for now, the numbers are working in its favor. The world is excited about IPOs like Airbnb and DoorDash, perhaps hoping for a brighter future. Which begs the question: should you buy Doordash stock on its IPO?