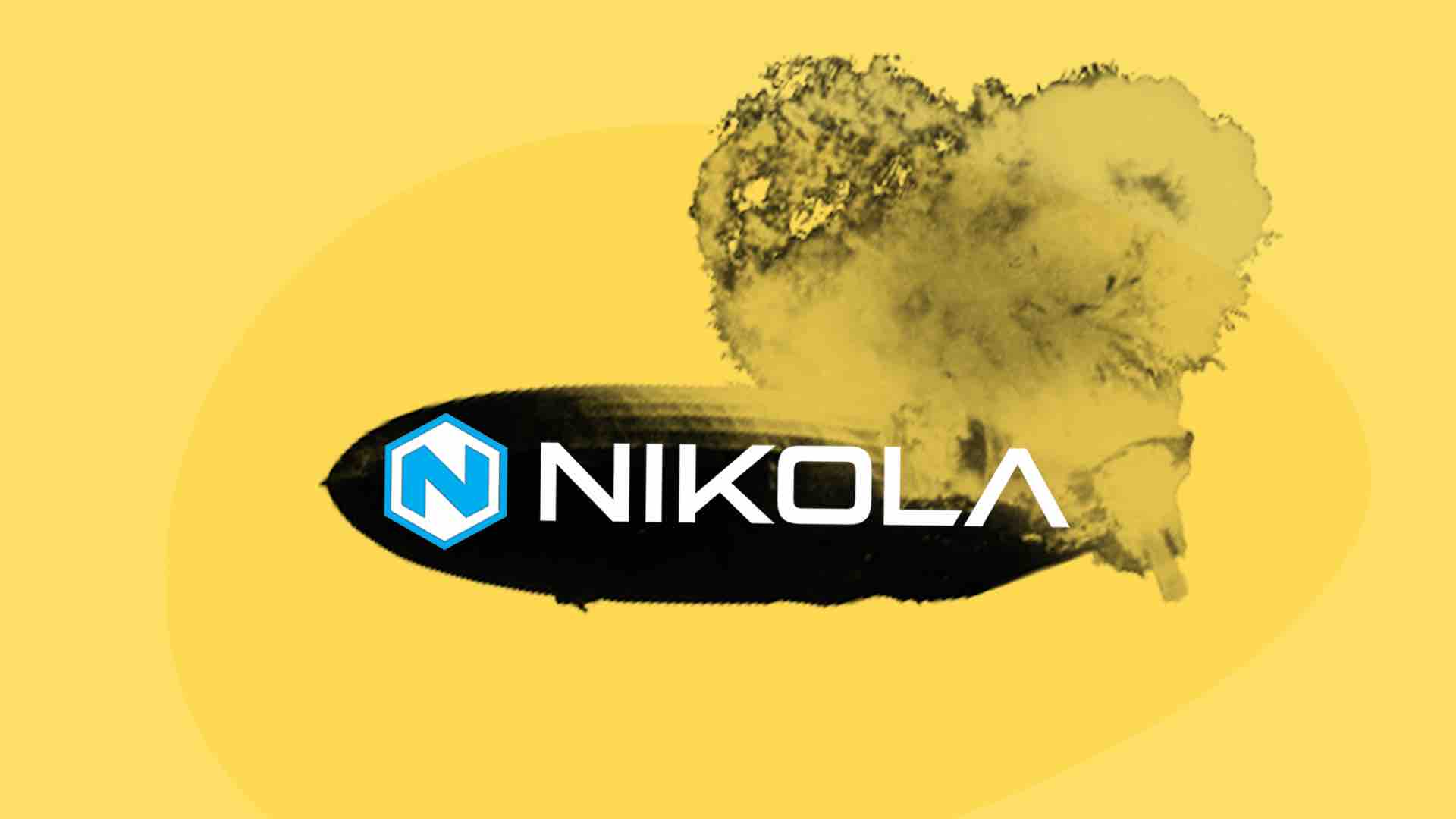 To become the next game changer in zero-emission vehicles, you can't rely on just good design. It seems that you also need to be brash and bold. Oh, and lots of tweeting.

You're also bound to suffer from comparisons with other companies, like Tesla and their controversial founder, Elon Musk.

One company had all the necessary ingredients: an eccentric founder, a seemingly perfect vehicle, and many promises.

We are talking about Nikola Motor and its vision for the future of transportation. But it was a vision that shattered in a matter of months. We'll tell you all about Nikola in this episode of Forensics.

This company is the brainchild of Trevor Milton.

He's a bit of a dilemma. Half of the media calls him a veteran of the startup world, having formed two prior startups. The other half calls him a failure because his first two creations didn't amount too much.

His second startup, dHybrid, aimed to reduce emissions by modifying diesel engines and turning them into hybrids. But dHybrid's existence was turbulent, as one of its lead investors apparently robbed them of intellectual property.

Then, dHybrid's main ally, Swift Transportation, sued them for not delivering on the agreement to retrofit several of Swift's trucks.

Milton eventually sold it and founded Nikola Motor Company in 2014. With this endeavor, he aimed to create highly efficient trucks. Like many a controversial founder before him, he wanted to take the road less traveled.

In an interview with Forbes, Milton expressed that, because he felt his idea was visionary, he decided to hire engineers who had no experience with the automotive sector to have a different perspective on things.

Such comments immediately drew comparisons with another millionaire who had no prior automotive experience, Elon Musk, something frequent in the future.

Hey, what did he expect, having Nikola Tesla's name?

The first model, sort of

Like Tesla, Milton wanted to go big. In May 2016, Nikola released the Nikola One semi-truck.

Features included 6x6 all-wheel drive, electric motors, and a whopping 2000 horsepower, thanks to its hydrogen fuel-cell system, which fed the electric motors. It could also run on natural compressed gas, which made it versatile.

The range was 1200 miles, ideal for long-haul trucking, and, for those interested, the down payment was just $1500. If semi-trucks weren't your thing, then there was the Zero, an off-road Utility Terrain Vehicle, or UTV, which promised outstanding features.

In December 2016, at a show, he ensured everybody that the Nikola One was on time and even hinted that the truck was operable, fuel cells inside and all.

People were blown away.

No less than 7000 deposits came in for the truck, and, at $1500 each, they totaled $10.5 million in real cash and a total of $2.3 billion when considering the truck's final value. These numbers further hyped those around the company.

Not long after, he formed alliances with companies within the truck manufacturing business. For Nikola, the future was bright: Milton promised they'd be ahead of Daimler, Volvo, and Paccar as the leader in truck manufacturers by 2019.

But the One and the Zero didn't exist. So far, they were only concepts. This again drew comparisons with Musk and his tendency to overpromise, and the trucking industry was wary of Milton and Nikola.

After all, the 7000 reservations didn't provide enough for research, development, and production. Still, Milton invested $20 million of his own money to calm those around him, and he was confident he'd raise $300 million.

At the beginning of 2019, Nikola purchased the rights to use land in Arizona, where they'd build their plant and produce, in Milton's words, 50 000 trucks a year.

In November of 2017, journalist Fred Lambert rode as a passenger in a stripped-down version of the Nikola Zero UTV, with no doors or screens. He rode alongside none other than Trevor Milton himself.

Basic as that version was, Lambert was ecstatic. He loved the ride, the quiet motors, and the comfortable suspension, and even declared that the Zero had more power than even the most powerful Tesla.

Then, in 2018, giant Anheuser-Busch placed a provisional order for 800 leases of the Nikola One. Milton again promised to start delivery by 2020, and just one year later, the company claimed there was a total of $14B in orders. Milton told the world Nikola had sold eight years' worth of production.

Finally, he had raised the $300 million he promised and was now looking to raise $1,25 billion to fund the entire operation.

A big reason for the hype was that Nikola wasn't just about trucks. It was about providing a sustainable network of hydrogen supply to feed those trucks. And it wasn't only the US, Nikola announced, by late 2019, another vehicle, the Nikola Tre, based off an IVECO platform, with an expected production date around 2022, or 2023.

Milton even fired at Tesla, saying that Nikola's technology made their truck 5000 pounds lighter.

Let's talk about that rivalry for a second.

Nikola has always lived under Tesla's shadow. Both have the same idea: to build a clean energy network to supply their vehicles. Nikola even ventured into solar, just like Tesla!

But Nikola wasn't just a small brother. The company sued Tesla, claiming Musk's company had copied their truck design. Tesla fired back, saying there was no reason for the lawsuit, but the legal battle continues now.

Nikola wouldn't sell only trucks, but the hydrogen needed to power them and a nationwide fuel supply system. So, in the end, each vehicle sold would give them about $750 000 in revenue.

To tend to the average consumer, they offered a badass truck called the Badger, and with it, Nikola aimed to dethrone the F-150 as the best-selling truck in the US Again, just a bit much.

And people bought into his confidence. By the beginning of 2020, Nikola was worth $23 BN, thanks to public exchanges, hype, and the backing from big names, like European truck manufacturer CNH, who invested $250 million. Milton was now a billionaire, correct that, he was now the first hydrogen billionaire.

But there were no trucks, none. Nikola was a company worth billions of dollars with zero revenue, and the media started to take notice: after all, that $23Bn valuation was as big as their projected sales for 2024.

Meanwhile, Milton didn't seem to care about having zero revenue. In an interview with CNBC, he said investors cared more about changing the world and the environment. Then he said that the plant in Germany was making trucks as they spoke.

With every public appearance, Milton pumped everybody up. Well, not everybody.

Nikola was one of the biggest names in clean vehicles. Even giant General Motors announced they would take an 11% share in the company for $2BN, and, as part of the deal, GM would manufacture the famous Badger in their plants. Nikola's stock went up as much as 53% when the news came out.

So, Milton and Nikola were having an excellent 2020.

But some were suspicious of the fanfare. Journalist Bryne Hobart said it best, again, using Tesla as a comparison:

Tesla is a story about how a CEO can ride the hype wave to build a real company that — while often criticized by investors — does manage to sell a game-changing product. Nikola is a darker story about a CEO who uses the same tools and abuses investors' tendency to pattern-match to build a business whose primary function is selling stock.

Ouch. But that's what it looked like: only concept trucks and an overenthusiastic CEO. And then, the Hindenburg happened.

The media started picking up on the noise, such as the plant in Germany, which wasn't operational by the time Milton had said it was, in several interviews.

Those renders? Over and over, Milton had said that he had come up with those designs in his basement. But, according to the Financial Times, he purchased them from designers in Croatia.

Then, journalist Ed Ludlow discovered that the truck displayed in 2016 wasn't even operational. People around Milton were alarmed when he said the Nikola One was a functioning truck: it had no fuel cells, and to prove it moved, the company rolled it down a hill.

Milton answered back rapidly and said there was no fuel cell because of safety reasons, and that he had never promised the car was actually working.

Milton then called everyone a hater, or at least, those who didn't share his vision. Very mature.

And here's where Hindenburg Research comes in. They are a company dedicated to forensic financial research. In September of 2020, just two days after GM had agreed to partner with Nikola, they released a document indicating Milton had lied repeatedly.

"We have never seen this level of deception at a public company, especially of this size."

Their report shows the entire company is a lie, from fuel-cells to trucks to their fuel system. Here's an example: some trucks only worked with compressed gas instead of hydrogen.

One of the trucks they unveiled couldn't run on hydrogen, but Milton stenciled H2 on it and said it did. So, you can paint Ferrari on your Civic and say it's a Ferrari. It's all fair game.

After the report, many agreed: Nikola had no value, and some analysts even predicted that the stock could drop as far as $5.

The allegations of fraud sparked a Federal investigation for misleading investors. Milton, on the other hand, disappeared. As soon as those words hit the airwaves, he quit Nikola and, one week later, erased all his social networks.

His personal fortune went from $6 BN to $2BN, and he was out of a job. But it didn't end there.

Weeks later, two women accused him of sexual harassment. They plan to carry on with legal actions, while he has denied the charges.

So, this is a collapse. But of one man, not the company.

Nikola still exists. GM even said they're interested in more involvement with Nikola. When they announced this, both stocks went up just a bit. And that's what Nikola seems to be all about: a stock that feeds on hype, promise, future. But no delivery.

Perhaps, that's what the entire zero-emission world is, a lot of hype, and people believing it.

But eventually, someone has to deliver on that promise. Milton won't be the one, but perhaps, under the right guidance, Nikola will.