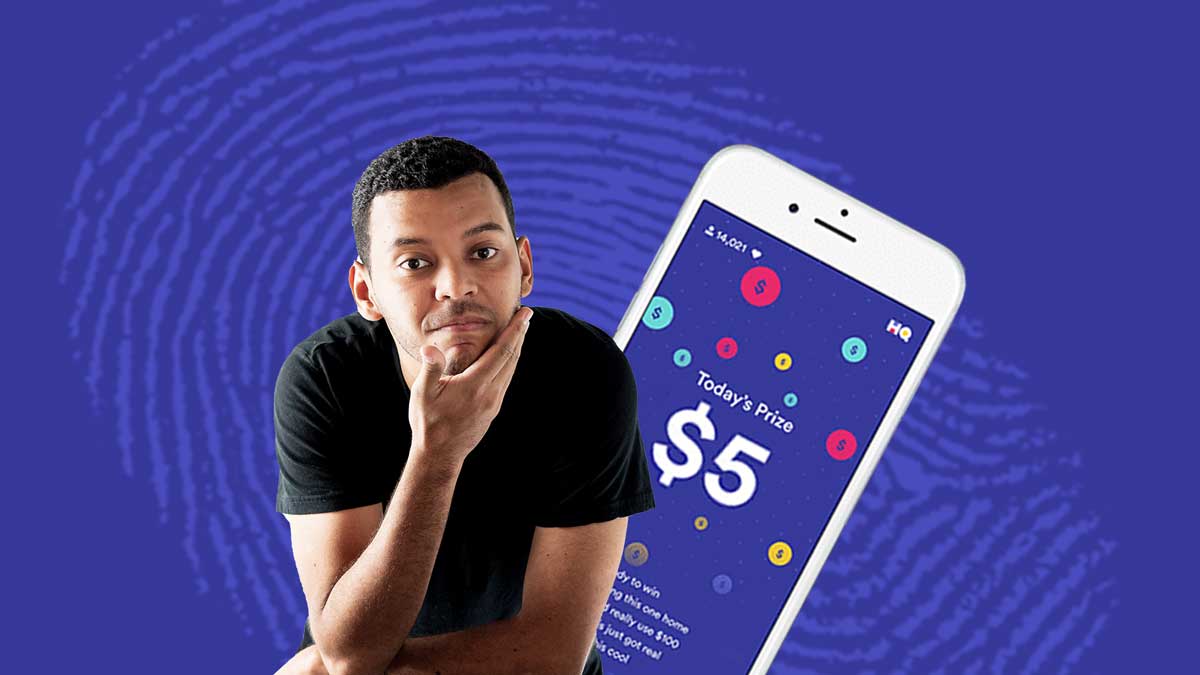 Most episodes in Company Forensics revolve around one of the following:

Bad business decisions, peculiar personalities, products that were too good to be true or flawed business models.

This episode, however, seems to have ALL THE ABOVE.

It was wildly successful. It rose to the top, hovered there for a very short period, and then crashed and burned in a fireball of controversy and champagne. All in just three years.

We talk, of course, about HQ Trivia, a seemingly innocent game in which players earned money by answering general culture questions, against the clock.

The premise was simple, so simple in fact, that millions downloaded the game and got hooked. Many called it the revival of the TV Quiz show.

But behind the scenes, there was drama, tales of abuse, addiction and much more. We’ll tell you all about it in this episode of Company Forensics.

HQ trivia was the product of Rus Yusupov and Colin Kroll. You might remember them as the creators of another failed startup, called Vine.

<If you want to see our episode on Vine, we provided the link in the description.>

After the failure of Vine, Yusupov and Kroll ended up working for Twitter but were let go in rapid succession. AND I NEED YOU TO REMEMBER THIS FOR LATER.

The pair were obsessed with user interaction. For them, the most valuable product a customer can provide is ATTENTION. They were right.

And to get it, they aimed at games.

“Since Colin and I founded the company, we really set out to develop this network of live interactive shows on mobile phones," Yusupov told CNN Business.

And HQ Trivia was just that. 12 questions, each with a ten-second timer for a cash prize. With just 10 seconds, cheating was practically impossible. It made the game much more interesting.

Like the gameshows of the past, the questions were presented by a charismatic host and winners would be placed in a leaderboard for the entire world to see.

Those who won the round claimed a jackpot which varied in size, ranging from a couple of hundred dollars to thousands. But it would be split evenly between all the winners, so the payout could either be very big or very small.

The trivia sessions were scheduled; every workday, there was a 9 pm session and weekends had a 3 pm sessions. And they lasted just over fifteen minutes.

This meant coffee breaks had a whole new meaning.

Because playing against the clock, having a chance to make money and knowing that you are better than someone else was an almost perfect combination.

And to this combination, you had to add Scott Rogowsky, the host.

Rogowsky worked in improv and standup before HQ Trivia and he eventually became somewhat of a celebrity. He was, after all, a likeable dude that added a fun vibe to the game.

The game launched in august 2017, and by March 2018, MILLIONS OF PEOPLE logged into each game, every day.

HQ Trivia was a hit.

So successful that it raised $8 million, THEN another $15 million against a $100 million valuation, from none other than Peter Thiel.

So, at first, the model seemed to catch investors’ attention.

And it had the evidence to prove it.

‘Twas Christmas 2017, when 730 000 people chose to play HQ Trivia instead of talking to their weird relatives about uncomfortable topics.

By January 2018, it was the number 3 game and number 6 app in the Apple App store. At its peak, 2.38 MILLION players join every single game.

The game was popular, yes, but it was also very flawed.

Livestreaming an interactive game through a mobile phone is hard. Very hard.

Interactivity needed to be instant, especially if the questions are timed. But sometimes, as many users complained, clicking on an answer did nothing and time ran out. Which meant that users were kicked out.

Other times, the quiz just didn’t work at all. So, when it crashed, which it did often, the hosts worked hard to keep the frustrated players from leaving before the problems were solved.

This was tiresome but not the only red flags around.

There was the question of money. Where did it come from?

Though each game had a prize, at first, there was no subscription and no evident ad placement or revenue from advertising.

Yes, HQ Trivia had investors, but nobody knew if and how it was going to be sustainable in the future.

When asked about this, the host Rogowsky was pretty secretive.

“I can’t really speak to it — they’ve got a strategy and they’re figuring it out,” Rogowsky said.

But, to the world, that didn’t seem to matter.

The game was popular enough to get sponsorships, which helped in some of the funding. HQ Trivia worked with big brands, such as Chevrolet and Nike.

Things were going great. At least so it seemed.

People began to notice that some of the trivia was very tricky, badly written and sometimes, senseless.

Also, there were the glitches and delayed payouts. Some winners claimed they didn’t receive their prizes for months and even more people claimed that they were automatically kicked out.

He wanted another job and was willing to work on weekend shows. But HQ Trivia wanted full commitment. So, they split, and HQ Trivia hired Matt Richards, who had a tough job on hand.

The standup comic came at a time when the game was no longer popular: the novelty of online trivia was wearing off.

While all of this was going, behind closed doors, there was A LOT MORE going on.

Remember that we talked about how the creators, Kroll and Yusupov, worked for Twitter but then were let go?

Well, it turns out that they were let go because they were “difficult to work with”.

Now, a lot of people might be difficult to work with but, apparently, these two were different.

Many former employees at Vine and Twitter reported that Kroll and Yusupov were toxic.

Yusupov was labeled as abusive to employees and disinterested in his work.

Kroll was reported as constantly arriving late, hungover and disheveled.

By the way, he was even accused of sexual harassment.

And it was the same with HQ Trivia.

Kroll and Yusupov clashed constantly. In fact, in September of 2018, Kroll and another board member forced Yusupov out of his position as CEO, and Kroll took over.

But then, in December of 2018, Kroll DIED of a drug overdose in his NYC apartment so Yusupov took over again as CEO.

Times were TURBULENT. Rogowsky’s departure led to inside sources leaking information that showed there was mutiny within the company.

“More than half of the startup’s staff signed an internal petition to depose CEO Rus Yusupov, whom they saw as mismanaging the company.”

So Yusupov did what he believed was best.

This is some Game of Thrones stuff right here. Minus the dragons and decapitation. But you get the idea.

Because of this, staff’s morale and interest in the game plummeted. And HQ Trivia fell off the ranks in the App Store.

Plus, the bank account was drying up. Yusupov was dishing about $1 million per month in prizes. But there was very little income.

And, back when he HAD money, sources said that Yusupov was slow to improve HQ Trivia.

His efforts weren’t great: he made different versions of the game, which were pretty much the same, he gave users the chance of buying extra lives and he added another game on weekdays.

But nothing really special.

HQ Trivia guzzled cash and it needed MORE of it. LOTS of it.

And it’s not like Yusupov didn’t try. He had been looking for funding since early 2018 but hadn’t been able to secure any investment.

Some efforts were made to spike interest.

New ideas like HQ Photos in which users rated photographs and HQ Tunes, where users had 10 seconds to guess multimedia questions.

Major networks like NBC and CBS helped in promoting the game. Even Jimmy Kimmel guest-hosted the trivia show, but all of this wasn’t enough.

Because Yusupov still ran the ship.

A ship, mind you, that was sinking FAST.

So Yusupov decided to sell and apparently, he found a buyer.

He assured the world that an “established business” was willing to HQ Trivia.

But it never happened.

That “established business” pulled out of the deal and Yusupov took to his media to communicate the inevitable end, with an intriguing choice of words.

“We received an offer from an established business to acquire HQ and continue building our vision, had definitive agreements and legal docs, and a projected closing date of tomorrow, and for REASONS WE ARE STILL INVESTIGATING, they suddenly changed their position and despite our best efforts, we were unable to reach an agreement.”

“And so effective today, HQ will cease operations and move to dissolution. All employees and contractors will be terminated as of today.”

So, in the day of love and friendship, chocolates and roses, as the 9 pm trivia started, host Matt Richards said out loud:

“Not gonna lie. This f*cking sucks. This is the last HQ ever!”

He then produced a big bottle of champagne and began to drink with co-host Anna Roisman. They cursed and lamented HQ Trivia’s demise. In this hour of drunkenness and  despair, the chat erupted in chaos, insults flew about and then this happened.

No, you know what? Come to think of it, this is appropriate.

It was the only way HQ Trivia could go out: in flames and in vice.

Why go out quietly when nothing about HQ Trivia was ever quiet?

But even after its demise, even Yusupov didn’t stay silent.

Just four days later, he announced that an “unnamed company” was purchasing the startup for it to live on.

But he said so in his very own way:

“We have found a new home for HQ, with a company that wants to keep it running. All employees, contractors and players are top priority. Severance will be paid, and you will be able to cash out.

NOT A DONE DEAL YET, BUT I’M OPTIMISTIC.”

Yeah, we’ll see about that.

What We Can Do to Help Startup Founders