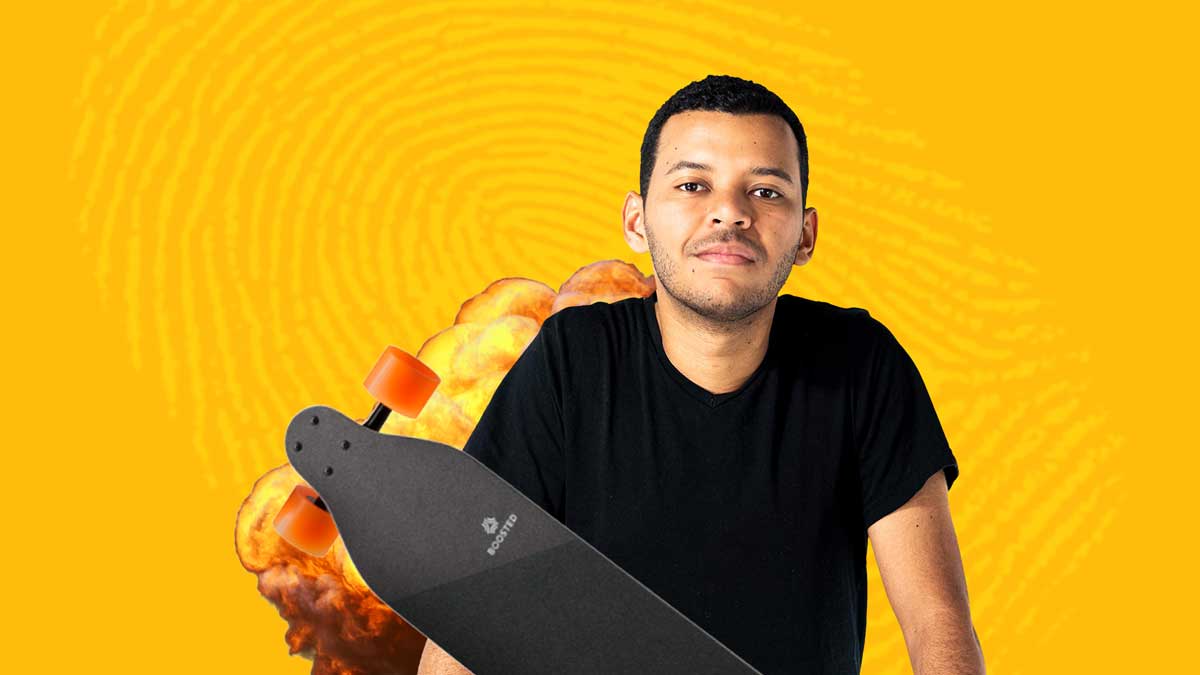 Boosted Board out of business

Skateboards have always been cool. But when someone decided to put a motor in them, they became even cooler, all hazards aside, of course.

And with this latest trend of micro-mobility and “last-mile” vehicles, it might come as a surprise that the first motorized skateboards exist since the early 70s.

But, in recent years, millennials have taken to electric skateboards and scooters to move about and upload Tik Toks while doing so. And this is largely due to one company: Boosted.

Yes, other motorized boards existed before. But Boosted boards elevated the game. They took an old idea, made it sleek, pretty, and high quality. The control system was easy to use and, as a company, they sought to form strong bonds with their customers.

But in March 2020, Boosted laid off many of its employees and sought a buyer.

So, it begs to wonder: if this company had successful products, with millions in investment, a cult-like following, and even the endorsement of one of YouTube’s biggest stars, why did it fail?

Sure, there was that China-U.S. trade war thing. But, was that all? Not quite.

Why Boosted boards went out of business?

Sponsored by Skillshare: Get 2 free months of Skillshare Premium

Stanford engineering students Sanjay Dastoor, John Ulmen, and Matthew Trand came up with the Boosted brand of electric skateboards in 2012, though they had toyed with the idea for years.

They wanted an electric skateboard that was portable, lightweight, and easy to use.  And their idea was so well-conceived that it was backed by Stanford’s own StartX accelerator program and then went to a very successful Kickstarter campaign, with a goal of $100,000.

Not only that, but they also graduated from the Y-Combinator program, a hotbed for innovative projects, and…a source for a lot of our Forensics videos.

Anyways, having succeeded in getting investors, Boosted launched its first products—the Single, the Dual and the Dual+ boards—in 2014. The models had one or two motors and varied in range, power, and, of course, price.

Part of their almost immediate success was their outstanding quality and attention to detail. Reddit users consider them the “Apple” of e-boards. This meant that, compared to other brands, Boosted boards weren’t cheap, as models went from $1,000 upwards.

Still, people bought them. And the company was working hard on its second generation of e-boards, which had more power, improved aesthetics, and more sizes.

Boosted boards garnered a cult-like status: riding groups, Reddit threads, YouTube channels. You name it, Boosted was there. And, right around this moment, they got about $10 million worth of investment, so the ship was sailing in the right direction.

But a lot of it is also due to one YouTuber you might have heard of: Casey Niestat. He used a Boosted board in many of his videos, and this got people hooked. But let’s talk about one particular video which involved Aladdin? That’s right.

He produced and directed a video called Aladdin Magic Carpet Prank and it was a hit.

The numbers at the time? Well, upwards of 17 million views. Right now, that video stands at 28 million. Aladdin chilled on his board and cruised around NYC and bystanders stood in wonder: what was he riding? Is it so easy to ride? The video certainly got people interested.

Marketing agency Overdrive makes a very compelling case for the impact this video had on Boosted. And it was also a double-edged sword. Because, what would happen if suddenly Niestat didn’t promote his Boosted board?

And, even with all this going their way, some bumps appeared on the road.

In early 2016, Rick Bross -no, not Rick Ross, Rick Bross- an avid Boosted user reported that his board emanated some sort of smoke.

In fact, the conversation with his roommate is quite funny.

“Your board thing is smoking.”

The first thing Bross told his roommate was: videotape it! (because, you know, viral videos).

He then rushed to his house only to find the board’s battery overheating, on the verge of exploding. His apartment was filled with a heavy chemical smell, so he put on a gas mask he bought as a joke. (sure, that’s why you have a gas mask).

He then posted the entire situation on those famous Reddit threads. And guess what? Boosted contacted him immediately, offered spares, and asked to get the damaged part back.

But it didn’t stop there; Boosted’s CEO Sanjay Dastoor flew from California to New York to meet up with Bross and analyze the damaged board.

And it wasn’t a one-time thing, as another user reported a smoking battery. Boosted was forced to issue a recall and told its users to stop using the boards altogether and disconnect the batteries.

Dastoor recognized that the problem stemmed from their own Quality Control standard, which meant stopping production in November and December, the peak of consumption. Though they hoped to restart production in January of 2017, Boosted took a big blow to their sales.

And times didn’t really improve for Dastoor. He had always wanted to see Boosted grow past electric boards, but his efforts weren’t yielding results. So, in mid-2017, he stepped down as CEO, and another Stanford graduate, Jeff Russakow, replaced him.

Russakow looked to grow Boosted and, as soon as he arrived, injected resources into the company. He practically doubled the workforce to about 160 employees, moved to a new office, and worked hard to launch the third generation of Boosted Boards. He also worked hard to increase employee health benefits.

He told the media the company had grown 450% in 2017 and planned to keep growing, with cheaper and smaller boards like the Boosted Mini. These new products had a price of $750 compared to pricier, larger boards.

And, yes, Russakow was also adamant in expanding from only boards into other products like scooters. But, even with apparently such a strong year in 2017 and new products, Boosted needed money.

So, 2018 was also a year of looking for investment.

The money would be funneled towards launching the Rev, a $1600 scooter, and finally, break out from the skateboard market.

The Rev was different from most electric scooters in the market in the sense that its build quality was above average. Steel frames, not a hint of plastic, big wheels, and a solid braking system meant the Rev was serious business, but so was its price and weight of 46 pounds.

Still, it was a good enough idea for investors to dish out $60 million dollars.

But, even with a new product on the verge of coming out, hefty investment and interest from the public, Russakow didn’t standstill. He aimed to grow and by 2018, the company had vendors in 34 countries.

But this expansion, along with a bitter trade war, would cost Booster greatly.

The promising scooter, Rev, was to be entirely produced in China. In fact, all of Booster’s products were manufactured in China.

So, when talk of a trade war started buzzing around, it seemed that Boosted would be directly affected, even if Russakow assured everyone otherwise. He told the Verge Boosted could “eat” the tariffs implemented during the war.

But, as soon as the trade war started to heat up, Boosted applied, and was granted, exclusion on its products.

Now, this might seem great, but it wouldn’t help them immediately. The U.S. government wasn’t paying retributions immediately; in fact, they were taking a lot of time, so Boosted wouldn’t see these benefits in the short run.

Then word got out that Boosted wasn’t paying its vendors on time. Turns out the Rev, the savior scooter had been delayed and some vendors were owed up to $100 000. Plus, it’s not like there weren’t other scooters in the market. Competition from Asia meant cheaper options were available which weren’t all that bad.

So, in reality, Boosted was stalling, in a very fast-moving market.

By this time, Boosted was a big company. Most of its around 150 employees were engineers commanding good salaries, and this meant a hefty chunk of change just for payroll.

And yes, their products were great. But micro-mobility is still a niche market with stiff competition. Reverse-engineered products—coming from China ironically—fill the market and some costing half as much.

So, in order to stay alive, in late 2019 and early 2020, the company started shedding costs. They reduced employee benefits such as providing lunch. They instead cordially asked their employees to bring their own lunch.

And, this might seem like a small change, but it was an indicator of how things were doing.

The company then lost many of its top personnel. The CMO left, then the VP of Engineering, the VP of Quality, the VP of Operations, and the Customer Experience Manager, just to name a few.

Signs pointed to troubled, very troubled times. It was just a matter of time before the inevitable happened. But, no one expected it to happen so fast. With a brief declaration on Boosted’s website, Russakow told the world that it “will continue to pursue strategic options under new ownership.”

But also, there it was, amidst the lines, the real reason why Boosted failed: “(…)unfortunately, developing, manufacturing, and maintaining electric vehicles is highly capital-intensive”. ‍

It is. Just ask Tesla.

And it will continue to be for a long time. So, if you want to start your own product, my advice is to start with a really nice logo, I mean, really nice. Then make hundreds of stickers and slap them onto Chinese products. You’ll fare better.

This content was sponsored by Skillshare: Get 2 free months of Skillshare Premium

Hertz Car Rental: Why did they go bankrupt?