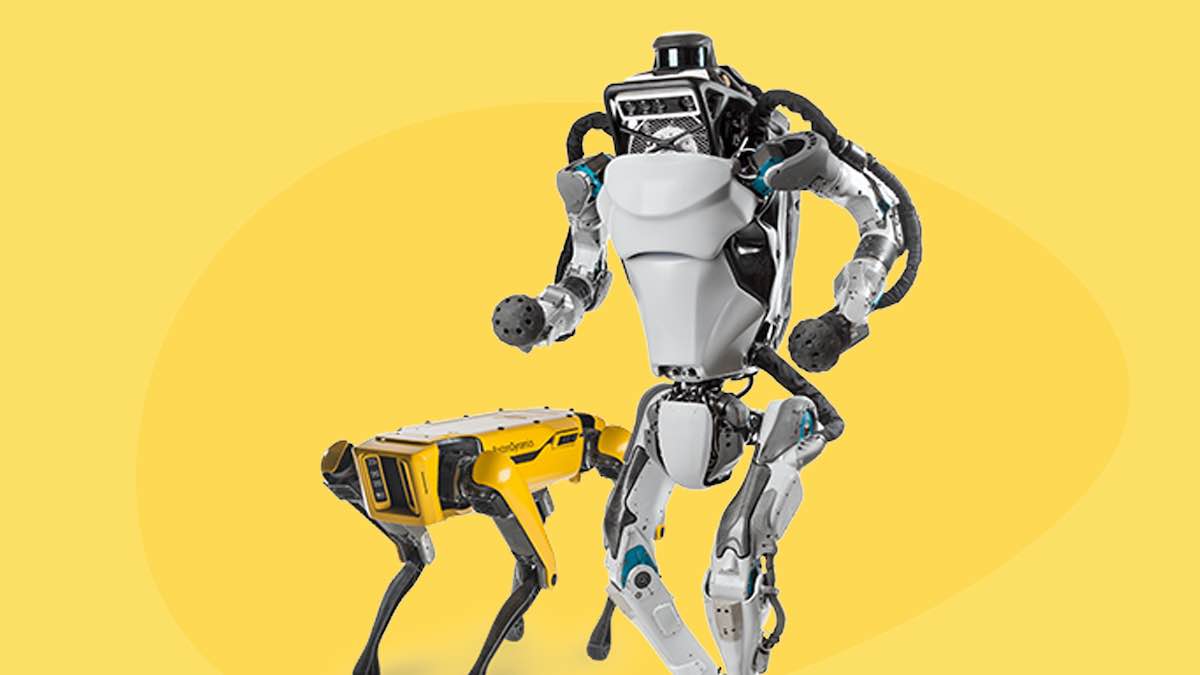 Boston Dynamics: The company making robots to replace us

Boston Dynamics: The company making robots to replace us

Robots are both fascinating and scary. The idea that they can be exponentially better than humans in many aspects and eventually become a threat is just unsettling.

But they can also lead to solving critical problems for humanity and enhance our lives in ways that we may not even imagine.

Artificial intelligence already optimizes many regular activities of everyday people. We interact with it mostly through our beloved devices, and it is responsible for a lot of how we experience the Internet today.

Now, the new generations of AI-powered robots are facing us with the future and are truly mindblowing. With them, AI is taking shape in the physical world more regularly and in more polished ways.

Robots you may see killing humans in recent Netflix shows, look a lot like robots that are available in the market. Yes, you may have seen that Black Mirror episode where a robotic dog hunts people, and you may notice the uncanny resemblance with Spot, the newest robot dog from Boston Dynamics.

The similarity probably doesn’t mean anything other than a creative license from the creators of the show. But the truth is that forward-thinking companies like Boston Dynamics are bringing robots into our lives sooner than we probably expected.

This is the company responsible for Big Dog, the quadruped robot that appeared in this sort of haunting video that the world saw for the first time around ten years ago. It was built for the military to assist the infantry in terrains too rough for vehicles, but it was then put down.

A few more robots and a couple of acquisitions later, and they are now responsible for Spot: the new, dog-type robot that took the Internet by storm recently. It is available on the market for $75K and brings a lot of fascination, some answers, and probably a lot more of wondering about the future.

Spot is an impressive blend of engineering and artificial intelligence, capable of some autonomy to move around interacting with the environment. It is controlled remotely but can also be programmed, and it makes smart decisions while moving around, like avoiding running into objects even if pushed to do so.

According to TechCrunch, companies like Ford are already planning to try Spot for things like scanning warehouses, one of many tasks that robots like Spot can optimize. Yes, we may talk about robots replacing humans later… but, spoiler alert: it will happen.

Spot is the most significant effort from Boston Dynamics to expand beyond Research and Development, and bring innovation to the consumer market. This may be the first step in a new direction for the company under the wing of Softbank, the Japanese giant.

So, let’s talk about how Boston Dynamics got to this point, what happened in those sixteen years between Big Dog and Spot, and how the future looks from here.

Marc Raibert is the brain behind the company, and it all started as a spin-off from the Massachusets Institute of Technology, in 1992.

As it often happens with cutting-edge technology, Boston Dynamics was first funded by military agencies like the Defense Advanced Research Projects Agency, or DARPA.

Big Dog was created in 2004, and it was deemed "the world's most ambitious legged robot" by then. It was capable of moving 340 pounds at 4 miles per hour alongside walking soldiers. Its four legs made it more versatile than wheeled-vehicles to cross tough terrain.

Supposedly it was dismissed for being too loud for combat scenarios. They also worked on other contracts, such as replacing naval training videos with interactive 3D computer simulations, for the Naval Air Warfare Center Training Systems Division.

Google gets into robots

In late 2013, the company was acquired by Google in an undisclosed deal. It was the cherry at the top for Google as they had acquired other seven robot-focused companies and startups, in just a few months. It all looked like Google was ramping up on robotics.

A big plan required a great leader, so, Andy Rubin was put in charge of this robotic division. Rubin is, among many things, one of the main brains behind Android, largely credited for its massive success.

It all looked like an exciting future for Google was just beginning. They planned that Rubin would lead this “moonshot.” He said to the New York Times in those days:

“Like any moonshot, you have to think of time as a factor… We need enough runway and a 10-year vision.”

But things took an unexpected turn when he left the company in 2014, just shortly after the acquisitions and the optimist plans, due to allegations of sexual misconduct from at least two employees of the company, according to a report from the New York Times.

It was a low blow for Google’s plans on robotics, and things don’t seem to have taken any clear direction since then.

‍
From Google to Softbank

The team at Boston Dynamics had continued to honor some of their ongoing contracts with government agencies and remained oriented towards the longer-term future. They continued working on robots like the anthropomorphic Atlas or Wild Cat, a fast running robot.

Google, on the other hand, had expressed their reluctancy to be a military contractor and reportedly struggled to fit the company into a revenue generation plan. There was no consent when it came to the direction Boston Dynamics should take and Google ended up almost putting up for sale.

There was speculation that Amazon or Toyota would be interested in buying it, but in early 2017, the Japanese Goliath, Softbank, acquired it as part of the group’s long-term focus on robotics.

Softbank is a Tokyo-based multinational business conglomerate, owner of stakes in many tech, energy, and financial companies. It also runs the Vision Fund, the world's largest technology-focused venture capital fund, of around $100B.

The founder and CEO, Masayoshi Son, said about the acquisition: “Smart robotics are going to be a key driver of the next stage of the Information Revolution, and the team at Boston Dynamics is a clear technology leader in advanced dynamic robots.”

They seem like a great fit. Softbank has had some success already with Pepper, a smart robot that gently interacts with people and can be helpful in many ways. You may have heard or seen hotels and other establishments employing robots like Pepper for customer interactions.

Spot is the first product of their symbiosis with Boston Dynamics, and Marc Raibert has suggested that the robot Handle is probably next. It mixes a leg-wheel motion system and in the latest iterations, it has been optimized for warehouse tasks.

Raibert said on a TechCrunch interview that they estimate there is about a trillion cubic-foot boxes being moved around the world every year and most of it is not automated, possing a huge opportunity for the product.

All that work, not yet automated, is still mostly done by humans driving cranes or other vehicles. You may see where this is going…

Will robots replace us?

This is the question that jumps in any conversation about robots. The debate is still open and experts have different takes on it. However, reality keeps moving at its own pace and some industries and jobs are already being impacted by the incursion of robots.

According to a CNBC report, studies suggest that 670K U.S jobs were lost between 1990 and 2007, and the number was expected to grow faster as technology continues pushing forward.

To some extent, robots are already replacing human productivity. Take the truck transportation industry for example. It is a billion-dollar business and employs millions of people. Self-driving trucks are already working and the AI is getting so good that no assistant driver will be required soon.

Jobs that consist mostly of repetitive tasks with predictable outcomes like transportation, logistics, or administrative support, are the most likely to be impacted by robots first.

Optimists believe that robots and new technologies will create new jobs and industries. That’s also probably true, however, getting an education in these fields is expensive and not available to everyone.

Corporate America is unapologetic about reducing labor costs. They will do anything they can do to optimize revenue, and robots offer quite a few advantages over human workers for this: no wages, no unions, no eight-hour shifts...

Singularity is a hypothetical point in time at which technological growth becomes untraceable and irreversible, resulting in unforeseeable changes to human civilization happening in a short amount of time.

According to Ben Goertzel, an AI researcher and expert, founder of SingularityNET, this hypothetical event may take place in only a matter of years or a decade from now.

So, what do you think awaits us in the future with robots? Would they surpass and dominate us, or will they make our life better? Perhaps a bit of both?