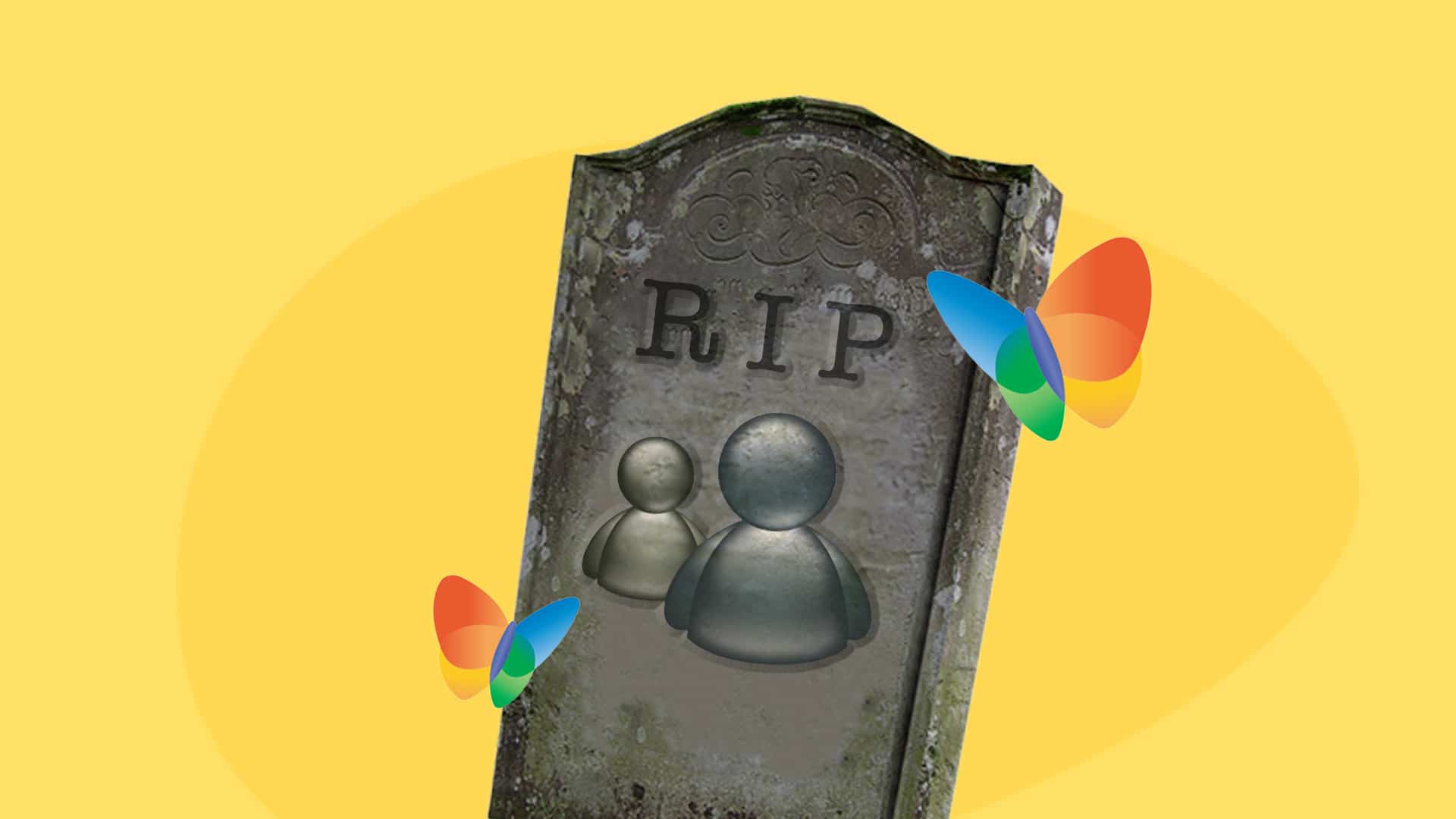 How Microsoft killed the one cool product they ever had: MSN Messenger

How Microsoft killed the one cool product they ever had: MSN Messenger

A moment in history with no Whatsapp, Snapchat, or Instagram; no, it's not a post-2020 dystopian novel, but rather an era called the 90's. And, by the end of that decade, one of the greatest messaging services was born.

It not only connected friends and family. MSN Messenger helped shape our adolescent years, from annoying nudges and animated emoticons to talking to your crush and expecting a reply.

But if we look back, we can see that it was more than just teenagers chatting amongst themselves. It was part of a war between now-faded giants that were unknowingly laying the foundations of social networks.

And now, it's completely gone. How did this happen? We'll tell you all about that time Microsoft was cool and how Messenger lost its flair.

Microsoft wanted in on the ever-growing instant messaging world, but it had to compete against three giants in the market: ICQ, Yahoo, and AOL Instant Messenger, known as AIM.

In a detailed narration for NP1 Magazine, former MSN Engineer David Auerbach explains Microsoft's two significant challenges: there were already millions using the competitors' platforms, and the programs weren't compatible. So Microsoft had to find a way to lure people to their software and also offer a way to connect with other platforms.

No easy task, but they had an ace up its sleeve: Hotmail. MSN Messenger would connect directly with the popular email service to give millions an instant ability to chat. But the staff at Microsoft didn't stop there; instead, they came up with a naughty but brilliant idea.

What if, through code, Messenger could access AIM? Yes, it sounds like a cheat, and it was. But it worked. When MSN Messenger launched, people could talk to contacts from both antagonizing services. Until AOL discovered the tiny hack.

AOL immediately blocked Messenger, but Microsoft insisted. If Messenger found a way through, then AOL countered, day in and day out. Auerbach recalls that the cat and mouse game was vital because, after all, AIM had 40 million users. And Microsoft wanted them.

Eventually, AOL fought back and managed to block out MSN by using the very same bug Microsoft had created, but to their advantage. Basically, they used their own security flaw to fool MSN's client, which, according to software analyst Geoff Chapell, is a genius yet controversial move.

In fact, at first, AOL called Microsoft a cheat for hacking them. But then, once AOL used the flaw against its competitor, Microsoft said that the move was a bit outside the realm of fair play.

Oh, the tech world and how it resembles a playground fight. So, this was the beginning for MSN Messenger: turbulent, truculent, but the first steps towards greatness.

Messenger's first ever version was basic: it had only text and a contact list. But through improvements and the launch of another icon, Windows XP, Messenger really took off.

To the younger audience, you might not understand how essential emoticons were back then. We had nothing but text, so a little smiley face went a long way.

And then, they included Webcam conversations. Back then, Messenger was giving us what we consider fundamental right now. It was setting trends, even some of them were annoying, like the nudge, born in 2005 and perforated eardrums until its demise.

With all these tools, MSN was carving its own path in the world of messaging. So much was its success that by December 13, 2003, Microsoft announced that it had reached an astounding 110 million users every month. The webcam calls had been a hit, with 2.5 million sessions each day.

You could play games like minesweeper and tic-tac-toe with your friends. Messenger was so advanced that, with version 7.5, you could even send a 15-second voice note. How we communicate today was due, mainly in part, to MSN and instant messaging.

The curse of success

Messenger had millions of users, had innovative features, and was, in all honesty, addicting. But it wasn’t perfect, anything but.

In 2002, many Messenger users had intermittent connections, and their buddy lists disappeared. Suddenly, all your friends were gone. And this happened in many countries, such as Chile, United States, Korea, and Singapore.

Estimates were that one-third of all Messenger users had some sort of problem.

Then, Microsoft Passport, the key to access many services, started failing, and users couldn't log in to Hotmail and Messenger. These challenges couldn't have come at a worse time because MSN was at the height of the chat wars with AOL.

Then came the chatrooms. Along with its competitors, Microsoft had created these chat rooms that were virtual meeting rooms where strangers could talk to one another.

If you think swiping right or left is weird, you definitely do not remember the creepy A/S/L, which stood for Age/Sex/Location.

That's right, as more people logged into Messenger and these chatrooms, also came the predators. The risk increased so much that, in 2003, Microsoft took actions and shut down all their chat rooms. Minors would now chat only through Messenger instant messaging.

Parents and organizations celebrated the move and, no longer having chat rooms available, more people took to Messenger.

Newer security measures weren't the only improvements Microsoft implemented. But, there's a phrase that we can use in this situation: if it's not broken, then don't fix it.

Windows Live and a new identity

MSN Messenger existed from 1999 to about mid-2005, in versions 1.0 through to 7.5. Then it fell victim to Microsoft's search for a new identity under the brand Windows Live.

Version 8 some aesthetic and functionality changes, including offline messaging, new colors, and even parental controls.

At first, many users disliked the new Messenger as it didn't evoke the past feelings. It was a good platform, but users didn't take kindly to the excessive bugs and software issues.

Also, there were compatibility problems, especially with Windows 2000 or earlier. Even those using Windows XP had to forcefully update to Live Messenger.

But, for every bad, there's a good, I guess. In 2006, Microsoft announced that it would join forces with none other than Yahoo of all companies. With this alliance, both messaging services now could integrate users, giving them a massive advantage over AOL.

With every new version that came along, users began to take kindly to Windows Live Messenger. Sure, it frequently crashed, and advertising was visually annoying, but those who criticized it eventually liked it.

But it wasn't the same anymore. It was just another okay product in an era in which being average wasn't enough. Microsoft knew this, but they didn't know how to solve it.

Desperate efforts for an identity

By 2009, it was clear that Messenger was a success. That year, it's been reported that Messenger had 330 million active users each month. The question now was whether it would last.

Upgrade after upgrade gave Messenger new tools and features, but it also restricted users from older Windows versions. And while there were some social network integrations and features, the product was a formidable messaging service but not much else.

There were some efforts to add more Facebook-like features. In 2010, they added a social pane in which you saw what everybody else was doing. The problem was that it was too much like Microsoft: that weird uncle that wants to be young.

And, keep in mind, this is the company that brought you Windows Vista. So, they know how to screw up a product. Windows Live took itself too seriously, and no one used that social pane because nobody uploaded anything to it.

Messenger started off as something fun and addicting. Then it evolved into a well-rounded product. But, by 2010, it just rode on its past successes and some of Microsoft's successful experiments, which weren't many.

But the reality was that Messenger was only the victim of a company that struggled to find itself. It balanced itself between coolness and corporate efficiency, between a surfboard and a suit.

Look at the products it came up with: a gaming platform which was a hit, thanks to the X-Box, a mediocre media library, and then, there was Bing, whatever the hell that was.

The 2010s was a decade in which Microsoft shot itself in the foot multiple times because it failed to find itself. And, adding fuel to the fire, social networks were meteorically rising in popularity. So, guess what?

Those social networks had all that Messenger provided, only better. Facebook had even copied that damned nudge.

The death of Messenger

It's no surprise that Messenger numbers were dropping. Do you want to guess whose numbers were increasing? That's right: Skype.

So, as if benching their star player for the newcomer, Microsoft decided to give up on MSN messenger and buy Skype for $8.5 BN.

Their new purchase was already established, with a solid user purse and with most of its bugs ridden out. Eventually, however, Microsoft would find a way to screw it up.

This marked the beginning of the end for Messenger. It announced that its legendary instant messaging platform would cease to be, except for mainland China. Users all over the world could now either migrate to Skype or stop using the platform altogether.

To prevent the latter, Microsoft went to great lengths to remind users to move over to Skype.

Did it work? Yes and no. After all, you still kept your Hotmail address, and Skype was still a messaging service. But it was uptight and corporate; it just didn't feel fun.

In 2014, Microsoft's migration finally ended when Chinese users moved over to Skype, motivated by a $2 coupon. And on Halloween of 2014, Messenger was done.

Messenger wasn't the first nor the last, but it was the one: many of us came from school to talk to people we've just seen. We spent long hours using our own strange abbreviated language and having pointless chats just to stay online. Messenger gave us hope in romance and the chance to express our heartbreak through corny statuses.

Messenger's story began with hacking, emoticons, and the feeling of a new, different product. But, in typical Microsoft fashion, the company that had given us those microscopic dopamine hits took them away when it tried to make an adult out of a teenager platform.

Tell us, do you miss MSN Messenger?