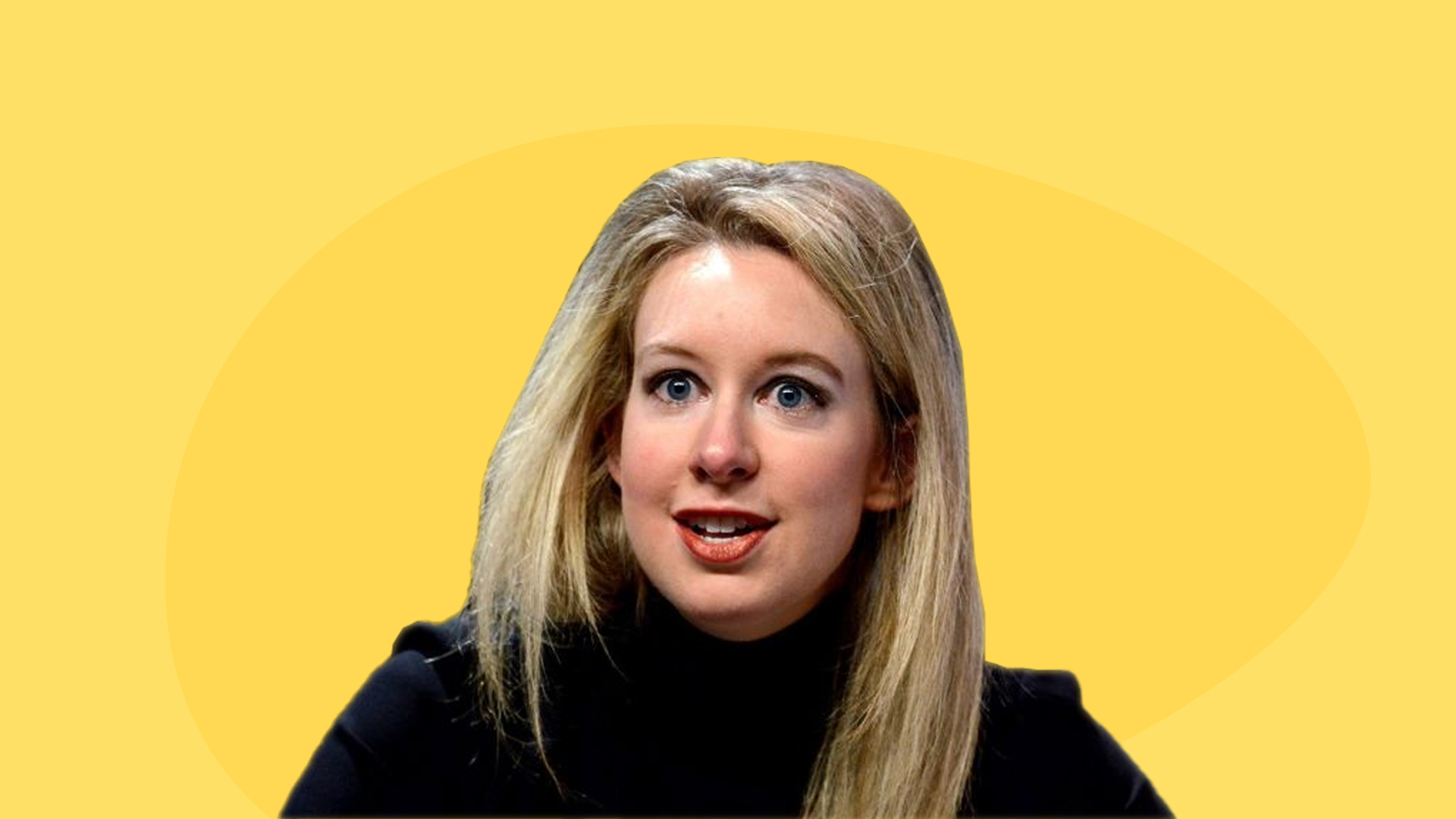 Her rocksteady gaze and baritone voice lured you in. Then, her idea blew your mind.

One drop of blood, hundreds of results: Theranos was going to revolutionize the healthcare industry. And Elizabeth Holmes led this revolution.

Investors blindly trusted her. She rocked magazine covers, and the media called her the female Steve Jobs. Her company was worth billions. But it was all a lie.

How did one person fool the entire world? We'll tell you all about it in this Company Forensics: Theranos.

The birth of Pandora's box

By age 9, Elizabeth Holmes had envisioned her time machine. By high school, she was fluent in Mandarin and sold C++ compilers and had her sights on becoming a billionaire. She wanted to study medicine but was afraid of needles.

So, she enrolled in Chemical Engineering at Stanford. There, she met Channing Robertson and insisted he let her work at his lab. A lab, mind you, in which mostly Ph.D.'s worked, not first-year students.

During her first college break, she spent a stint in Singapore, working at a lab testing for SARS.

And it was there that she began questioning current medical blood tests: one needed to draw blood, then transfer it to another device for analysis. Once results were in, medications came from a different place and medical follow-up from yet another source. It was a labor-intensive, error inducing process unchanged in decades.

To a point, she was right, as 70% of errors in testing occur before the lab tests the sample.

Once back at Stanford, she began working on an idea to obtain not just one, but hundreds of results quickly, from drops of blood, instead of traditional vials. Her pace was relentless. It took her less than a year to file her first patent: a smart drug delivery patch.

But her obsession was blood testing. Holmes believed in the power of a single drop of blood. She was so adamant that she dropped out of Stanford to form Theranos, even if her professor Channing Robertson told her not to.

She did it anyway. At just 19, she formed her own company, Real-Time Cures, but that first name was ineffective, so she changed it to Theranos, from Therapy and Diagnosis. And she wasn't alone in her quest. She convinced Robertson to form a part of Theranos, as a technical adviser.

Robertson introduced her to several venture capitalists, including Tim Draper, who gave Theranos the first million dollars, and it didn't end there. Elizabeth Holmes took the world by storm: she had raised more than $30 million by 2006, and $400 million by 2014. Investors valued Theranos at $9 billion.

They believed in her idea, but one question remained unanswered: what exactly did Theranos offer?

The promise of a revolution

Holmes's aura was enigmatic. She spent all day at work. Vacations were unnecessary, so was coffee. (Forget the billions, she didn’t drink coffee. that’s amazing). Her daily routine consisted of a fancy turtleneck uniform, little sleep, and vegan shakes.

But when she walked into a room, her energy drew people's attention, with her powerful gaze and low, almost murmuring tone.

Like her idol, Steve Jobs, she wanted to change the world. Theranos wasn't just a blood test. Its aptly named Edison machines would eliminate or improve error-prone areas by automating them. Testing would happen in-site with results available in just hours. Plus, blood waste would decrease, and so would costs.

A cholesterol check runs for $30, but Holmes promised a cost of just $3.

Some people even entered Theranos test labs. Journalist Joseph Rago explained that the process was swift. A technician increased blood flow to the fingers by warming them, then drew a few droplets of blood, which landed in a small receptacle called a nanotainer. Within the same lab, this nanotainer traveled through analyzers and delivered results by the time he walked out the door.

It seemed perfect. But you know this show.

Holmes was in the center of the media universe, thanks to her promise of a better tomorrow. Supermarket giant Safeway decided to invest $350 million to retrofit 800 locations with Theranos clinics for in-store tests.

The Cleveland Clinic joined forces with Holmes to spark up innovation, reduce costs, and increase visit turnover. During a Fox News interview, both Holmes and Cleveland Clinic's CEO, Toby Cosgrove, even spoke of "getting ahead of diseases."

With great fanfare, Holmes announced that Theranos had partnered with pharma giant GSK. In 2015, its first test, for Herpes Simplex I, received FDA approval outside a laboratory testing environment.

Amidst all this seeming success, Holmes ran such a tight ship, no one knew how Theranos operated, which caught the attention of one doctor.

Stanford University's own Dr. John Ioannidis noticed something unusual: medical innovation goes through constant reviews by other medical community peers, which ensures the validity of the design and the safety of patients. But Theranos had divulged no reviews, no white papers, nothing.

Such practices are called stealth research, and its goal is to prevent others from copying, to which Holmes openly admitted.

“Stealth research creates total ambiguity about what evidence can be trusted in a mix of possibly brilliant ideas, aggressive corporate announcements, and mass media hype.”

He wrote a column on the topic and used Theranos as an example. In no time, a legal team sought a retraction from Ioannidis.

The company even pressured Ionnadis to coauthor an editorial with Holmes in "some major journal" to clarify that the FDA approved Theranos, which was enough evidence of its efficacy.

But he said no, and he wasn't the only suspicious person.

Meet journalist John Carreyrou, who aimed at Theranos and didn't spare any bullets. In his first article, he uncovered that Theranos used traditional methods, and not its Edison devices, to analyze blood. The technology displayed only flawed tests under a façade of a technological breakthrough.

Holmes fired back the same day the article appeared. In a television appearance, she said that: "This is what happens when you work to change things, and first they think you're crazy, then they fight you and then all of a sudden you change the world."

But those damning articles started an avalanche that would bury Theranos' reputation.

In 2015, Safeway pulled out of the alliance, citing delayed testing and unanswered questions. Some Safeway employees confirmed that Theranos technicians first drew out blood with their system and then with a traditional syringe method.

Others reported misdiagnosis. One employee even got results that indicated prostate cancer. When he retested in another lab, the results came back normal.

Then there's that big alliance with GSK, of which GSK had no recollection, according to a spokesperson for the company:

"I cannot find any evidence that we've done business with them in recent years."

Holmes then insisted that they had worked with GSK ever since 2008, but Theranos wasn't even in business back then.

In 2015, an FDA inspection showed that Theranos' labs were mishandling products, and not following processes in compliance with FDA standards.

So, the agency quickly backtracked its approval of the Herpes test and suspended Theranos soon after, citing poor quality management.

And what did Elizabeth Holmes do? Tweet about it, of course.

2016 was a bloodbath. No drops this time. The Centers for Medicare and Medicaid Services (CMS) concluded that Theranos posed immediate jeopardy to patients' safety as it couldn't reliably diagnose the need for blood thinners.

The company failed yet another regulatory inspection, so the Government revoked all licenses and sanctioned the company, which had to close down its facilities and lay off 41% of its staff.

By the end of that year, Theranos was under investigation by the CMS, the Justice Department, the SEC and the U.S. Attorney's office. Quite a list.

It didn't end there. In 2017, the company faced more lawsuits, from Walgreens, investment funds, and the State of Arizona Court of Law. In 2018, the SEC charged Theranos, Holmes, and former president Ramesh Balwani with fraud, because they deceived investors into believing that Theranos could work as promised. It didn't.

Holmes settled: her penalty consisted of $500 000 dollars, giving up 19 million shares of the company and couldn't have a leadership position for ten years. Balwani didn't settle. Both weren't home free.

Theranos crumbled. By September of 2018, the company shut down. Its valuation? $0. The Holmes and Balwani trial still hasn't begun, because of the pandemic. But, if they are found guilty, they could face up to 20 years in prison.

One can't help but wonder, how did she do it?

It seems, now, that Holmes was the embodiment of lies, from her voice, which according to some employees, is fake to an authoritarian attitude.

A former employee told ABC that Holmes would fire anyone who disagreed with her. Lovely work environment.

To Holmes, all that mattered was Theranos, even if it meant lying and deceiving.

A Vanity Fair investigation revealed that the Board of directors pushed Holmes to confirm the Theranos results with other methods. If that results differed, they had enough money to fix any issue. She agreed but then withheld any findings, and offered evasive answers. When the Board pressured, her solution was simple: she overhauled the board of directors.

Then there was the secrecy Ioannidis found suspicious. The excuse seemed perfect: if nothing leaked, there was no chance of copycats. But it was more than that: with a robust legal core behind her, Theranos relied heavily on nondisclosure agreements and litigation threats to keep people quiet, even members of the Board. Holmes could openly deceive customers and even employees, with fake blood tests and deceitful tours, knowing no one would speak up.

Internal departments couldn't interact, and communication between them was limited. The employees only knew partial truths and a lot of lies.

Divide and conquer always works. Holmes was able to keep employees blind to the troubles the company faced. The multiple-part Vanity Fair investigation revealed that Holmes told her employees that Theranos had over 300 tests already working but didn't tell them that most of them were in the research phase.

The list of deceptions and manipulation is prolonged, leading many to believe that Holmes is a sociopath and a narcissist.

But, to some, including herself, she might be a visionary willing to do what it took to succeed. And that's where the danger lies. But she doesn't care because, pending trial, rumors are she's trying to start another company.