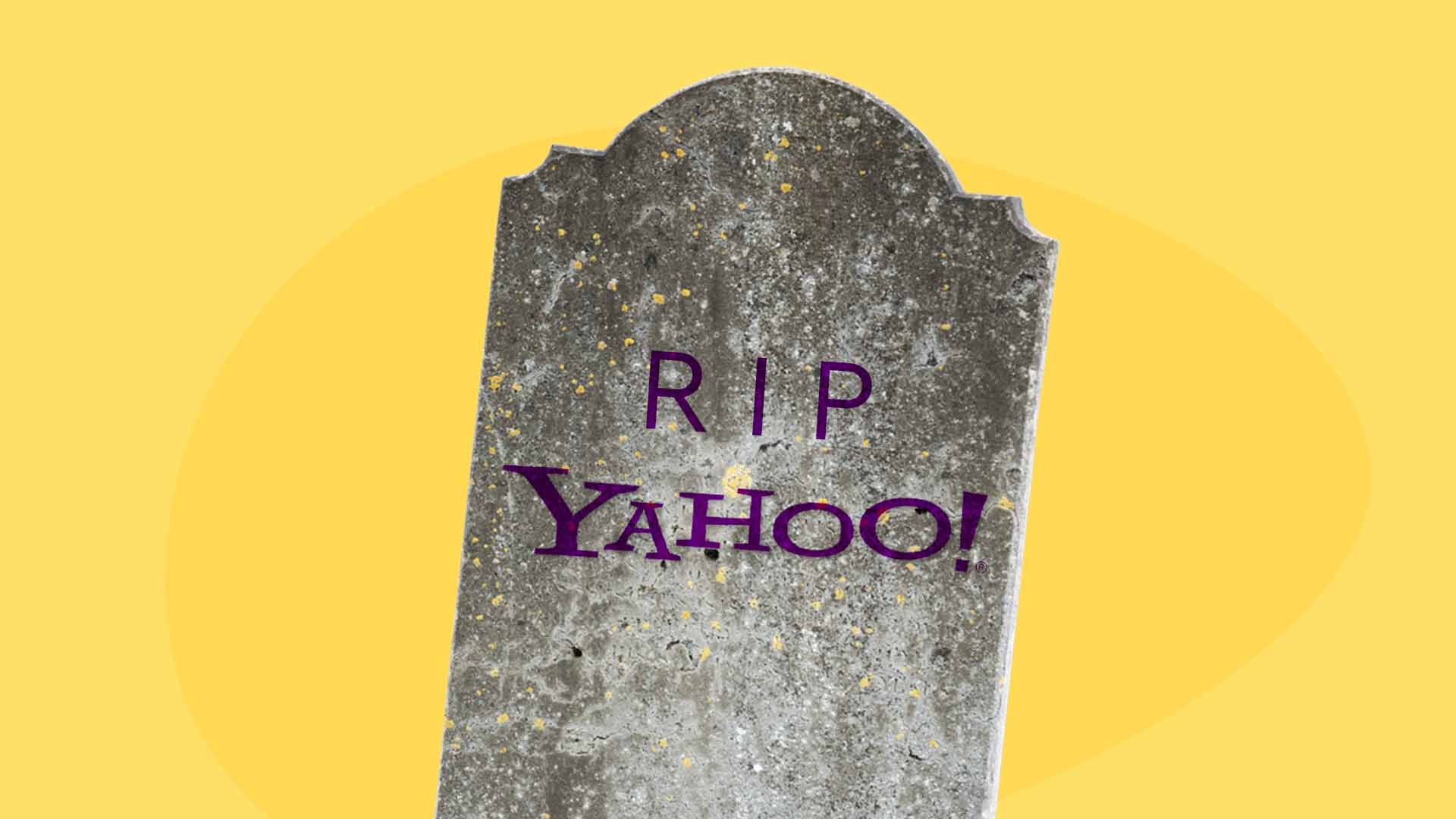 The death of Yahoo! (and how they almost bought Google)

The death of Yahoo! (and how they almost bought Google)

$125 BN. That's how valuable Yahoo! was at its peak; that was more than Ford, Chrysler, and General Motors combined. And it all began as a hobby.

Yahoo! brought us many of the services we take for granted today, including cloud storage and setting up your website.

But the name Yahoo! has disappeared, consumed in the food chain that is the tech world. How did it get to this? We'll tell you all about Yahoo! in this Company Forensics.

Their site separated pages into categories and subcategories. Simple, even primitive, now, but back then, it was a success. People flocked to it to find other interesting sites, and by the end of 1994, Filo and Yang had a million hits and averaged 100 000 visitors.

Motivated by the success, the two wanted to professionalize the project, but the name didn't work. They went with Yahoo!. According to some articles, the name stands for "Yet Another Hierarchically Organized Oracle." But, both Filo and Yang say they liked the definition of a yahoo: "someone rude, unsophisticated, uncouth."

They even added advertising, which would be their blessing and their curse. With a solid idea, they sought investment and met with Sequoia Capital, who agreed to invest nearly $2 million. With money in their pockets, Filo and Yang hired a management team that included Jeffrey Mallett and Tim Koogle.

In 1995, Koogle stepped in as CEO and pushed for an IPO in 1996, even with a reported loss of $600 000. But it was the age of the internet bonanza; Yahoo! showed promise, and investors were interested.

At the time, Yahoo! 's first-day gains were the third-largest of any IPO on record.

A sign of things to come because it was to grow a lot.

Yahoo! was no longer only a website directory. It was changing internet culture, with catchy TV commercials and a new, trendy slogan: "Do you Yahoo!?"

It also expanded its catalog, with personalized content, news and websites under the MyYahoo! Service.

Plus, kids could navigate the internet in a safe environment with Yahooligans!

Their big move came in 1997 when they launched Yahoo! Mail, based on Rocketmail, a company they had purchased.

Users not only had email access wherever there was internet service, but also personalized web services like Classifieds, Yahoo! Chat, and storage (3 MB, but hey, it was something).

Centralized email and tools, plus personalized content, all within one account? Do you see the value of what Yahoo! was doing? And it was also global, with specific references for individual countries or regions, such as Yahoo! Brazil and Yahoo! Hong Kong, thanks to its ability to personalize content.

By 1999, Yahoo! rode a killer wave of speculation around the Dot-com world. The stock, set initially at $13, reached an impressive pre-split value of $475 at the height of the Dot-com bubble, by January 3, 2000.

Up to this point, their expansion sounds logical. Some ideas were good, like mailing lists and creating personalized websites, but Yahoo! got into everything it could. And it was a lot.

Here's a list of firsts Yahoo! did, either through mergers or inhouse.

Its Yahoo Briefcase, which launched in 1999, provided cloud storage, way before Dropbox and Drive. Sure, it had just 30 MB, but the potential was there.

Long before Spotify and Apple Music (did you check out our video?), Yahoo! launched Yahoo! Music in 2001. Back then, it allowed a freemium service: 1000 songs per month for free, or ad-free and unlimited skips for $4 per month.

Yahoo! also had radio when it purchased Broadcast.com for $5,9 BN, a lot but it showed promise. Broadcast provided channels for specific tastes and topics. Think of the potential: first radio, then video. It could've been YouTube. But, all it did was make Mark Cuban a billionaire. Hey, at least somebody won.

The company was also at the forefront of cultural change, with an almost punk-rock attitude. Former employee Tom Parker recalls how quickly Yahoo! became a poster child for a carefree attitude within Silicon Valley.

"It was casual on a college level. David Filo didn't wear shoes. You could wear shorts and flip-flops to work. It was super entrepreneurial, which is now kind of a cliché."

But, if you look at where we are now, we don't associate any of these technological breakthroughs with Yahoo!. Not even the culture. And it's all their fault.

The downfall that came in pieces

Yes, some external elements aided Yahoo! 's fall, the biggest of which is the Dot-com crash. After the bubble burst, Yahoo's stock went from $475 pre-split value to just $8.11, in nine months. It had survived, barely.

But a lot of its flaws were internal, especially in the leadership department. Remember Tim Koogle? Yes, he turned Yahoo! into a profitable company, but he also made critical mistakes.

Back in 2000, AOL and Time Warner joined forces (check our AOL fall video), threatening Yahoo! 's online presence. Rumors said that Yahoo! would merge with another big company in the e-commerce world, eBay.

The reason is that Yahoo! relied heavily on ads for income, and eBay would've allowed the company to branch out into other sources of income. But, Koogle rejected the idea, which led to conflict with another veteran, President Jeffrey Mallet.

Signs of his mistake showed up quickly. Even with the Dot-com crash sequels, eBay still turned in $184 million in revenue and, to this day, still operates. Meanwhile, advertising plummeted, and Yahoo! 's wallet shrunk. Soon after, Koogle stepped down as CEO.

Then, there's the "piece of advice."

You might've heard of Sergey Brin, Larry Page, and a search-engine prototype they created in 1998, called Google. Well, initially, they tried to license their engine to other companies.

Then they met up with David Filo, and he gave them one tip: to launch the engine by themselves. He even introduced them to Michael Moritz of Sequoia Capital, who would become one of Google's first backers.

Let's cut Filo some slack because he couldn't have imagined the success. But, that's because, in part, Filo didn't believe in search engines.

"I remember telling [Yahoo co-founder] David Filo in late 1998 or early 1999 that Yahoo should buy Google because I and most of the other programmers in the company were using it instead of Yahoo for search. He told me that it wasn't worth worrying about. Search was only 6% of our traffic, and we were growing at 10% a month. It wasn't worth doing better."

Because Yahoo! relied heavily on ads, it was easier to outsource its searching services. They even signed an agreement with Google in 2000 to do so. But Graham's warning echoed: Google was too important not to take into consideration.

By 2002, under CEO Terry Yemel, Yahoo! saw the potential in search engines. The company even tried to buy Google for $1BN but took too long to decide. By the time Yemel and the board agreed to buy it, Google's price had gone up to $3BN, and Yahoo! backed out.

Without a reliable search engine of their own, Yahoo! bought Inktomi, to up their "searching" game. And the final product wasn't bad per se.

Compared to Google, it was limited as it worked through bidding instead of bidding and statistical analysis, as Google did. The rival's efficiency slowly lured users away from Yahoo! in the search engine war, a war it would eventually lose.

We wish we could say the search engine war alone killed Yahoo! But, no. It was doing too much at the same time.

For example, Flickr: it was one of the best, if not the best, photo-sharing service at the time. After buying it, the potential was there to create the next big thing in social networking. But, there were signs of conflict from the start.

Yahoo! forced Flickr staff to think more about integration than innovation. Experts say that all that mattered was Flickr's database, and not creating new services and improving customer care.

And Yahoo! didn't see the signs. In a Gizmodo interview, a former Yahoo! employee stated that:

"I spent years at Yahoo trying to signal the alarm that Facebook was going to take over unless we stepped in and used our existing social networks to fight back."

By the way, Yahoo! tried and failed, again due to internal lethargy, to purchase Facebook.

Yahoo had too much in its hands: music, Real Estate, cars, jobs, classifieds, attempts at social networking, but nothing stood out. What do I mean? Well, Spotify is for music. Google is for searching. YouTube for video. And Yahoo!?

A kingdom without leaders

Yahoo's failure to find an identity came from the top. Leadership, at Yahoo!, was always lacking. Here are some examples.

Under CEO Jerry Yang, in 2008, Yahoo! famously rejected Microsoft's offer for $45 BN, because Yang felt it undervalued the company and still believed in the success of ads alone. This decision cost him his job.

Between 2011 and 2012, amidst desperate times, 4 CEOs tried to fix Yahoo! before Marissa Mayer, its last CEO, got the job. She showed promise, as the stock doubled in less than a year, but there was little else to celebrate.

She also made the controversial Tumblr purchase, for $1,1 billion, only to have it float along with no innovation nor control over the content. No one understood why they had bought Tumblr in the first place.

Then there's the Alibaba IPO. Back in 2005, Yahoo! invested $1BN in the Chinese giant. During Mayer's tenure, in 2014, Yahoo! sold millions of shares back to Alibaba, just before the IPO. But the offering was so successful that it meant Yahoo! practically had left $36 BN on the table.

A weak stock, wrong decisions, mediocre products, and a lack of identity; the king was slowly dying.

And Verizon brought the ax to finish the job. In 2016, the telecom giant announced it would buy Yahoo's core business for $5BN, pocket change compared to what it was once worth. Ironically, Yahoo! ended up in the same dustbin as AOL, another former giant.

Two former kings were now pawns for another company, but it wouldn't end there, because their names were quickly erased, under Verizon's branch, Oath, which struggles to stand out.

So, if you want to build a kingdom, be sure to have an identity, an answer, for when they ask you: what's your kingdom's value?

Slidebean Founder's Edition: What We Can Do to Help Startup Founders

Our Founder's Edition plan gives you access to our company founders, who are available to answer your questions around fundraising, growth marketing, and design.