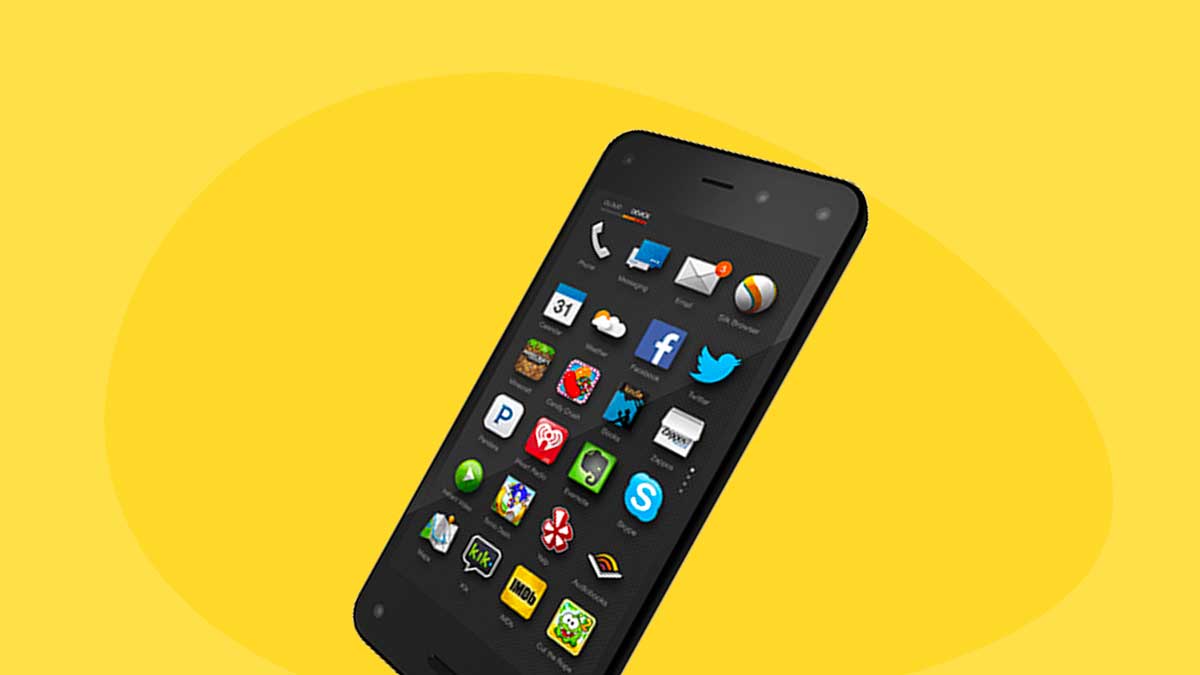 We have talked about phone companies in the past. Remember those episodes about Blackberry or Motorola, companies who once were at the very top of the industry and somehow ended up falling in battle. Today, we will not exactly talk about a phone company but about a phone, yeah, a particular one.

A phone that, for better or worse, had everyone's attention just by existing, just because it was created by one of the largest internet companies in the world: the Amazon Fire Phone.

Now, of course, Amazon is not a phone company, but what is it exactly? It's a huge store, and it's likely where you get a lot of your stuff online, even groceries in some locations, probably even more now that people may be spending more time at home. But Amazon also provides web services to clients like Netflix, NASA, or Slidebean.

It's also a media streaming platform with its production studio for feature films and series, and it also acquired the largest video game streaming platform, Twitch, for around $1B, in 2014. But it also had its line of diapers.

So, what kind of company Amazon is? How do all these things connect? It sounds like a brand that aims for global market domination somehow, and seemingly with the Fire Phone, they had high hopes to create a product that would unify it all into a worldwide, fresh brand. Something like Apple or Nike, but for everything.

Then the story of the Fire Phone can be an Amazon story of company culture and identity. Let's break that down.

Although the Fire Phone was a failure that meant big losses, Amazon remains a large business thriving at the top of e-commerce and web services, broadly speaking. But also yes, the Fire Phone may have taught a valuable lesson about what kind of brand Amazon was and was not back in 2014.

When and why the Amazon Fire was created

Let's start talking about when and why the Fire Phone was created. It's probably a good starting point to talk about the Kindle electronic reader, that first piece of hardware that Amazon built for end-users.

As you may know by now, Amazon's e-commerce business was initially built on books, CDs, and DVDs, and it was still on that foundation of books that the Kindle reader was released back in 2007. With it, Jeff Bezos stepped ahead and created the first electronic reader, anticipating the digital future of books and reading.

Yes, a lot of Kindle's success can be credited to Jeff Bezos’ vision and his determination to innovate and enhance the customer experience.

Former Amazon executives remember how he insisted that the original 2007 Kindle included a cellular connection so customers could download and access e-books from anywhere. Back then, critics thought the idea was an exorbitant flourish that would eat into profits.

But his foresight was essential to Kindle's success, and he silenced the nay-sayers and short-term shareholders who doubted him. Just like when he encouraged the free-shipping initiative and executives pushed back, nervous about its impact on earnings.

However, the Kindle was a relatively simple device, especially compared to a smartphone. Bezos wanted to make the Fire Phone a bigger hit, one that would help Amazon be a cool lifestyle brand.

The phone itself and all of its gimmicky features were attributable to Bezos's creative mind. It got to a point where former product leads reported a heated debate on the team about whether the phone was heading in the right direction. But at a certain point, inevitably, they all just relied on the man's pedigree of success.

So, let's get a closer look at the phone and remember what made it different.

At first glance, it looked like any other Android from 2014, but it ran Amazon's Fire OS, which was a stiffer version of Android without the Google suite of apps or the Play Store.

A second look into the phone's front would quickly reveal the five front-facing cameras. Yes, five cameras: your regular front camera plus one on each corner of the phone. A full-blown camera set up to track your face down and power the phone's most distinctive features.

For example, the set of wrist movements and hand gestures that could be used in some interactions with the phone, like navigating through menus or pages. It all looked fancy, but I think we can agree that after a time of interacting with the phone like that every day, it could quickly become overwhelming.

But most importantly, this face-tracking camera system powered what Bezos hoped would be the phone's most distinctive feature: Dynamic Perspective.

And he drove the team hard on this one, setting up a creative challenge sustained basically in his desire: to create a 3-D display that required no glasses and was visible from multiple angles. So, the key ended up being facial recognition, which allowed the phone's cameras to track a user's gaze and adjust the 3-D effect accordingly.

It looked like the parallax effect some phones use today, where background images move past the camera more slowly than foreground images, creating the illusion of depth in a 2D scene.

As opposed to Bezos, the rest of the team couldn't imagine useful applications for Dynamic Perspective though, beyond some fun gaming interactions and flashy 3-D lock screens.

In the words of a former engineering head at the time, for Dynamic Perspective, "we poured surreal amounts of money into developing it, yet we all thought it had no value for the customer, which was the biggest irony. Whenever anyone asked why we were doing this, the answer was, 'because Jeff wants it. '"

And what Jeff Bezos ultimately wanted was to create a device cool enough to stand out and compete with the iPhone. Make Amazon a loveable brand, repositioning it away from being so mundane and towards becoming more of a lifestyle brand like Apple.

Bezos also mentioned how brands like Walmart and Microsoft, were somewhat "unloved" and suffered as a result. So, in a way, Bezos wanted to make Amazon something more like Apple and less like Walmart if that makes any sense. And it ended up not making much sense.

In simple words: Apple or Nike fans would spend any money on their brand to get a piece of it, while Amazon is a brand you want to associate with good deals. Pretty much. In words of a high-level source from Lab216 back then: 'There was a branding issue: Apple is premium, while our customers want a great product at a great price.'

And so, pricing the phone was complicated. Bezos didn't want just another regular device, and the margins that a low-cost phone could garner would be minimal, even if managed to stand out in an ocean of cheap devices.

The only solution, some inside the organization argued, was to differentiate the hardware enough to justify a higher price point and hope to go after some of Apple's profits. But Apple is a ferocious competitor with dominance in high-end products, decades of rigorous R&D, a world-class design team, and a unique approach to hardware and software.

The idea that Amazon, a neophyte hardware maker whose CEO has shown no particular affinity for design, could successfully attack Apple was unrealistic.

So, as fresh and unique as Bezos wanted it to be, the Fire Phone had to find its way back to Amazon's roots. So, another star feature of the phone was Firefly. Using the phone's camera and microphone systems, you could point the device at objects or media and find them in Amazon to, of course, buy them.

The "Amazon.love" memo from Bezos helps put the phone project into perspective. Amazon is one of the world's most admired brands, a constant presence atop surveys of customer satisfaction. But it's also a company that millions of people depend on for good deals on boring products like low-cost paper towels, not a $650 smartphone.

Yeah, it ended up costing $650 upon release, or $199 with a two year AT&T contract, back in 2014. That's the same price of the iPhone 6, released that same year and one of Apple's best-selling phones ever. The following comparison can be harsh, but it's yet another definite proof of the Fire Phone strepitous fail.

The Fire Phone, on the other hand, didn't pass the 35K units sold in its first couple of months after release, according to a publication on The Guardian from that year. Very soon, it was evident that the phone had failed to appeal to Amazon's customers, and there was no real interest from them in an Amazon-lifestyle type of product.

Reviewers knocked the device for its gimmicky features, especially dynamic perspective, which most found worthless and distracting. They also took issue with the phone's bland industrial design and disappointing ecosystem, since Amazon didn't offer the same library of apps or cohesion of services as Apple.

But what Amazon got most wrong was the cost: The Fire Phone was too expensive for its customers. In October 2014, during the announcement of 3rd quarter financial results, Amazon stated they took a $170 million write-down due to costs associated with the phone and had over $83 million worth of it in inventory.

Amazon's CFO, Tom Szkutak, indicated that the pricing strategy was initially too high and was the reason for the product's poor consumer reception.

And that's how the Fire Phone taught Bezos and company a harsh lesson about what the Amazon brand may and may not be. After this adventure, some executives and shareholders wanted to see the company refocus in its e-commerce business and start enjoying its profits after years of aggressive growth.

But everything seems to indicate they'll have to keep waiting or even better, just come to terms with Bezos's vision of the company and its perpetual expansion to new markets.