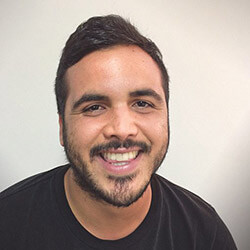 These two companies have been holding grudges for years, and now Apple is hitting Facebook where it hurts. Right where it makes money. If anyone still didn't know, Facebook makes money by powering the ultra-targeted ads you see online.

Yes, those ads can get kind of creepy at times when they pop up to show you products that you may have talked about recently or even just thought about.

And the magic behind the creepiness relies mostly on intelligent trackers that follow you all around the web and the apps you use to learn from your behavior and habits and then target you with ads of those products you're more likely to buy.

But Apple is not a fan of this, and they are now revealing these hidden trackers and even letting its customers decide if they want to share their data with these third-party companies.

It sounds fair. And it is, but it happens to get in the way of the multi-billion dollar business of online advertising. So, Facebook has come out swinging to defend its business.

The result has been an escalation of a years-long staredown between the CEOs of both companies.

Let's talk about what these tech giants are fighting about, look out for any double standards, and what could be some of the implications for us, the commoners. Welcome to Company Forensics.

Privacy. That holy grail of our digital society. Sometimes you get the impression that it is still taken for granted. But when you see tech monsters like Facebook and Apple going after each other over privacy issues, it should be a reminder of how valuable it truly is.

The internet has transformed the boundaries of this fundamental human right in the last couple of decades. Now, the limits between protection or commercial value and surveillance can get intangible, and society is still figuring out the rules.

In this panorama, Apple has always advocated for privacy, and whether you like the company or not, the truth is that it has a trustworthy record of protecting customer data.

Apple has done things like refusing a request from the FBI to develop a modded version of iOS and let them into a suspect's iPhone. Specifically to overwrite the system's blocking that happens after many failed attempts to unlock it.

The company refused to, and Tim Cook stated by then:

"... Building a version of iOS that bypasses security in this way would undeniably create a backdoor. And while the government may argue that its use would be limited to this case, there is no way to guarantee such control."

This happened during the events of the San Bernardino shooting in 2015. The FBI took Apple to court for it but then dropped the case, leaving more questions than answers and somehow letting them win.

So, yes, Apple is the industry leader in delivering streamlined security support for its operating systems across all its devices. That means that hundreds of millions of customers are consistently getting updates and new features on their phones.

And the latest iOS version introduces a new feature that openly informs users of what data do third-party apps and sites want to track from them. If you have an updated iPhone right now and look for an app on the App Store, you will see this new section.

It is a revealing breakdown of all the data that apps collect from you and your device. Get ready to do some scrolling if you look for the Facebook app.

Apple claims this to be the equivalent of the nutritional facts label that food has. The latest iteration of iOS 14.5 will go a little further by actively requiring users to authorize third-party developers to track them or just opt-out of it.

The secret sauce of targeting ads

Tim Cook has repeatedly expressed his belief that people are ultimately the product and not the customer on platforms like Facebook. Facebook set a precedent for social media platforms to be free and then learned how to monetize the data it obtained from its users by selling it to advertisers, allowing them to be ultra-accurate when they serve ads.

These trackers are intelligent algorithms that work on the back, designed to learn from users' behavior and habits online and target them using sophisticated criteria. Then, they serve ads of the products people are more likely to buy, even when they are more prone to making the purchase.

The more time you spend on Facebook, or even on external sites that they also track, the better the algorithm gets to know you and the more successful the ad targeting is.

In a nutshell, that's the online advertising industry as of today. Some can be okay with it and may find these targeted ads to be useful. But the truth is that sharing sensitive data with third parties for advertising, or other means like politics, can get very creepy and blow out of control.

The Cambridge Analytica data breach that blew up in late 2018 is just one awful example of how the misuse of this sensitive data can have immeasurable consequences for society and politics.

Back then, data from around 50 million Facebook users was leaked without their consent and allegedly used to build sophisticated and manipulative campaigns to influence political events such as the 2016 US election or the Brexit referendum.

So, is there anything wrong with Apple letting people know and authorize what data they share with third-party companies? Ultimately, they're not banning apps from tracking data or advertising. They're just asking them to get permission from the customer beforehand. That's it.

Still, Facebook is taking it as an existential threat, calling it an attack on its business model and getting ready to fire back.

Yes, Facebook has been living at the eye of the storm for quite some time now, and things may reach a tipping point at any time.

As you may have heard, the Federal Trade Commission and several US states have sued Facebook for breaking antitrust laws and building a monopoly through anti-competitive practices. Check our video about it if you haven't.

Other countries like Australia, Canada, and members of the EU are also working to regulate big tech companies like Facebook. And yet, the company has the legal muscle, the money, and the worst timing to go after what they consider another monopoly in Apple.

Mark Zuckerberg has been as vocal as he can about Apple's actions. He says it's not just about privacy but an anti-competitive attack on their advertising business model. He states that Apple is a competitor in services like messaging apps and takes unfair advantage of its enclosed operating systems and App Store.

He also argues that Apple will cause advertising services to be more expensive, affecting small businesses that rely on these ultra-targeted ads and may not afford more conventional advertising methods.

Apple is not new to antitrust claims either. A few months ago, it faced intense criticism for the 30% platform tax that it charges for all transactions on its operating systems. The company engaged in some severe legal exchange with the Fortnite publisher, Epic Games, and to this date, Fortnite is nowhere to be found on the App Store.

Spotify has also claimed that Apple incurs unfair practices on their store and operating systems to favor their music service. However, they seem to be softening some of that, for example, allowing third-party apps like Spotify or Gmail as the default instead of their pre-installed apps.

But Facebook seems tired of taking the blows and reportedly has been preparing a lawsuit of its own against Apple, claiming that it is also incurring monopolization through their operating systems and the App Store.

It remains to be seen if Facebook files the lawsuit or retaliates otherwise, but the battle is on. By the time we wrote this, iOS 14.5 was still in beta, pending roll out to the general public. Some might even argue that the change may not be as big of a deal as Zuckerberg is portraying it, and many people might be just fine with sharing their data.   tyou

Is it a desperate and hypocritical move from Facebook to sue Apple for being a monopoly? Is it that bad that consumers know the data that developers and advertisers can get from them? Or is it fair that they keep it on the back? This is definitely a story that’s still going and we’ll definitely keep an eye on it as it is written.